a new AM QRP transceiver from the 4SQRP group

Mini-review of the Nouveau 75 by W9RAN

OK, maybe not quite that "mini"...here's a few of my impressions of this innovative kit from the 4 State QRP Group.

I've been interested in amplitude modulation of a class E PA for some time and after Dave Cripe said to stay tuned for the next 4SQRP offering, I wasn't too surprised to see what it was, and bought one from him at the Cedar Rapids Hamfest in August.

Assembly went quickly since the bulk of the circuitry was SMT that had been pre-assembled.   I don't know (and 4SQRP doesn't say) whether the boards are tested in any way, but I instantly ran into trouble on initial power-up.   By the time I realized it, one of the modulator PMOS FETs was red hot...well it smelled that way anyhow.   Too hot to touch the heatsink and clearly detectable by nose!    I thought initially I'd caused the heatsink (drain) of Q11 to touch the tab (drain) of Q10, and wrote it off to bad luck and put in an order to Digikey for more FETs.    In the interim I realized the drains of those two FETs are actually connected in the circuit, so my next step was to wait and see what happened with the replacement transistors.

Unfortunately - the same thing happened.   By this time Dave was dealing with complaints about the limited dynamic range of the TA-7642 IC used for the back end of the receiver.   I'd built my own "simple superhets" using this IC at 455 kHz and found that the only way to obtain decent performance is to make the AGC threshold adjustable.  The published circuits work but with only 30dB of AGC range it just cannot cope with strong signals without overload and distortion.   I recorded some audio samples to help Dave evaluate the receiver, and he reached the same conclusion and designed a daughterboard replacement with functional AGC that was sent to all purchasers. (As of Nov. 2019 sales of the Nouveau 75 are temporarily suspended while the new cicuit is incorporated into the PCB so the daughterboard will no longer be necessary).

Meanwhile I was distracted by other interests and the Nouveau 75 sat on the sidelines for 6 weeks or more.   Despite several requests, nothing was heard from 4SQRP and I figured I had a bad SMT board and would just have to troubleshoot it myself.   But the class G bootstrapped modulator is not the easiest circuit to understand!    I resolved to build an LTSPICE model for it so I could see what was supposed to be going on.

Finally I decided to get to the bottom of the problem and posed a couple of questions on the 4SQRP reflector, and to my surprise one of my AM buddies Jeff W9GY replied that he had a Nouveau 75 that was going into meltdown too!   No longer feeling like an isolated case, we both resolved to figure out what was going on.

My breakthrough came when I started probing around with a scope instead of just looking at DC voltages.   Instantly it became clear that something was oscillating, with several volt waveforms in the 600 kHz range on the gate of Q11.    Adding a .1uF capacitor shifted the frequency down to 200 kHz range and  reduced the amplitude considerably, but clearly something was not stable.    But with the oscillation reduced, the modulator was able to work  and positive peaks were seen.  Even though I knew it was just a "Band aid" on the problem and even though Q11 still was running warm I decided to post my findings on the reflector so that Dave or someone might figure out the source of the oscillation.

Instead credit goes to Jeff W9GY, who found that by reducing the value of R43, which reduced the bias on Q11, the oscillation stopped completely and Q11 remained cool, and produced good modulation.   Congratulations to Jeff for getting to the root of the problem!   I was thinking the oscillation was a result of some component failure, when in fact Jeff and I happen to have boards that either have a manufacturing defect (i.e. wrong component) or some other component tolerance variations that caused this problem that other users have not seen to occur.   Dave later suggested just removing R47 which accomplishes the same thing, reducing the gate bias voltage on Q11.

I'm never satisfied with a solution without knowing the root cause and being able to draw a straight line between that and the solution that is based on good engineering principles.   However I think that we will have that knowledge in time and in the interim, the solution seems to be a good one and allows what was clearly a well thought-out and innovative design to work as it should.

Transmitter:  After resolving the modulator meltdown mayhem, I made some measurements and found that the resting carrier is 2.9 watts (34v P-P across 50 ohms) or 12 watts PEP.  Modulation is full on a scope with 100% peaks, although I have to run the mic gain nearly wide open using the supplied mic.     Audio quality is good with the supplied electret mic.

Receiver:  I connected an AC voltmeter across the speaker and adjust the volume for a middle level with no RF input.  This resulted in 44mV of white noise, which is -14dBm.    I then increased the signal generator output 10dB increase until the AC voltage increased to -4 dBm which is 141 mV.   That level is 58uV or about -72 dBm.      To my ear, the sensitivity is better than that, because I can't disable the AGC that's trying to hold the audio level constant and there's no way to easily disable it.   To the ear, I think the sensitivity is more like -25 uV for 10dB SNR which is -79dBm and that jives with my original guesstimate.    (This is with the replacement daughterboard installed - results with the TA-7642 would be far worse).

Since I had the setup I measured my FT-817 which has a "good" receiver, and has provision to disable the AGC.   I measured < 2uV for 10dB SNR (-100dBm).   About 20dB better than the Nouveau 75.    And it will be readily apparent when connected to an antenna that the Nouveau 75 is quite "deaf", in that it will not hear weak signals that are loud and clear on other receivers.   But I think it is more than adequate to hear everything that will hear the Nouveau 75's QRP AM signal!   It's also important to rember this is a $100 kit, including enclosure, mic, and speaker, with a very usable amount of power and VFO that tunes the full 75 meter band and a enough general coverage to hear WWV and WTWW!

In actual on-the-air tests the Nouveau 75 has received good reports when used with my usual 75 meter dipole with tuned feeders.    "S7" reports from 250-300 miles away are pretty typical.    Of course performance will depend on propagation and QRN/M and other factors, my low power AM operation is on AM nets where once I'm on the list,  I have the chance to get signal reports on a clear frequency.  As all QRP operators know, regardless of mode the secret is to have patience and not get discouraged when you can't "break the pileups".

There are times when more power is needed, and that's why I pulled down the converted D&A "Hawk" CB amplifier off a shelf.  It boosts the output of the Nouveau 75 to a very respectable 20 watts resting carrier, 80 watts PEP output.   This little amp uses a single 6KV6 with 900 volts on the plate, similar to the schematic but the version I have uses just one tube instead of two.   Since it includes RF switching it's easy to use with the Nouveau 75, just flip the switch and go.  Incidentally this amp came from the era when outfits like D&A were trying to evade FCC regulations by claiming to be all band amplifiers, however their "all band" tank circuit was only efficient on 27 MHz for some reason!   I threw that away and replaced it with a tapped toriod for 80 and 40 meters, and it works very well.   Beware however these amps tend to be very marginal in terms of design, for example this one was putting 900+ volts across a pair of 450 volt electrolytics, and sure enough one of them popped.   So I've since modified the power supply to use three electrolytics, which is well within the safe zone for 450 volt parts.      Any sweep tube would be suitable in this grounded-grid configuration including some of those with oddball filament voltages that don't bring premium prices.    A little sweep tube amplifier like this would be easy to build and a worthwhile addition to the Nouveau 75.

For information and ordering - http://www.4sqrp.com/n-75.php 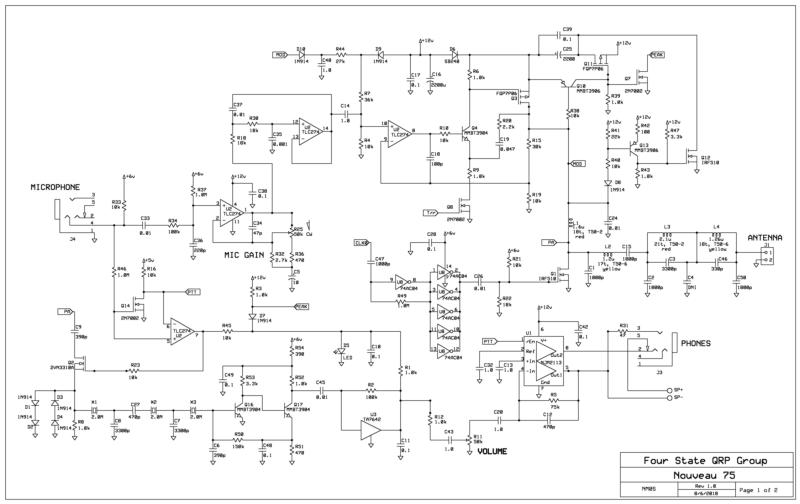 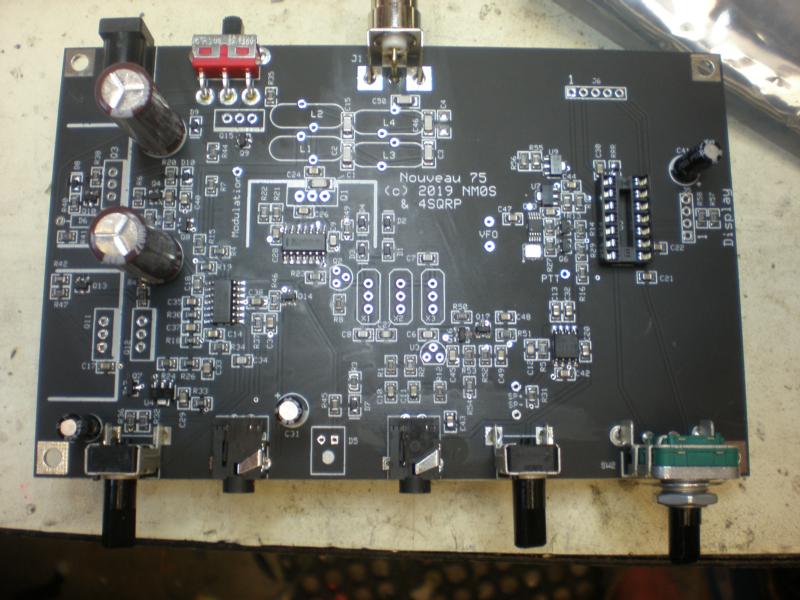 Most of the thru-hole components added 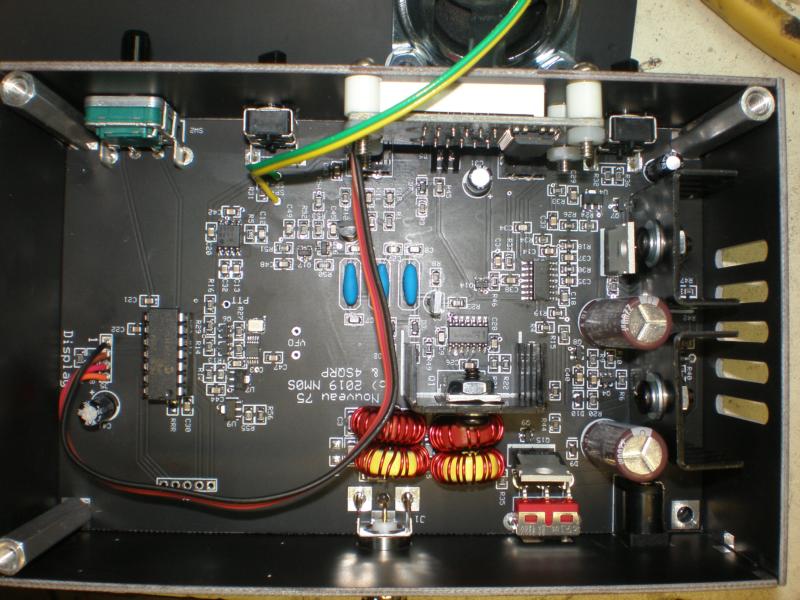 Enclosure is made of black-masked PCB material. Speaker and display shown 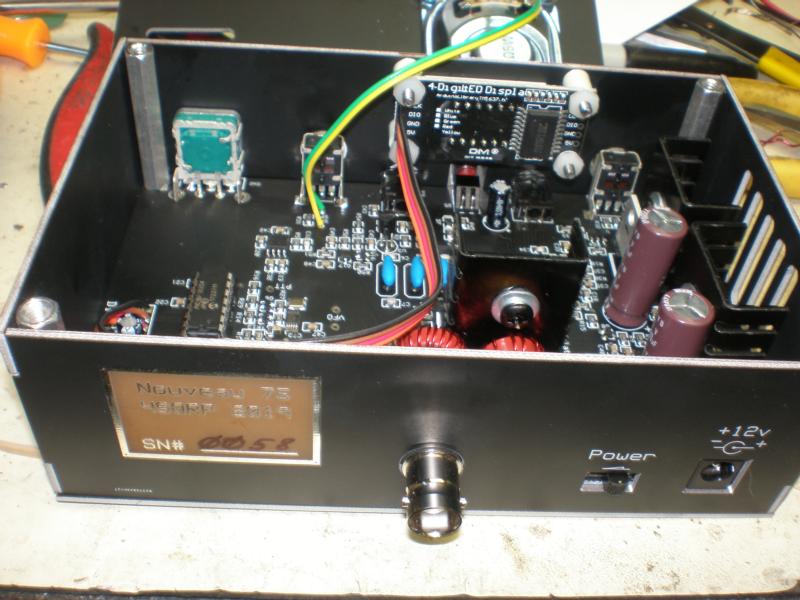 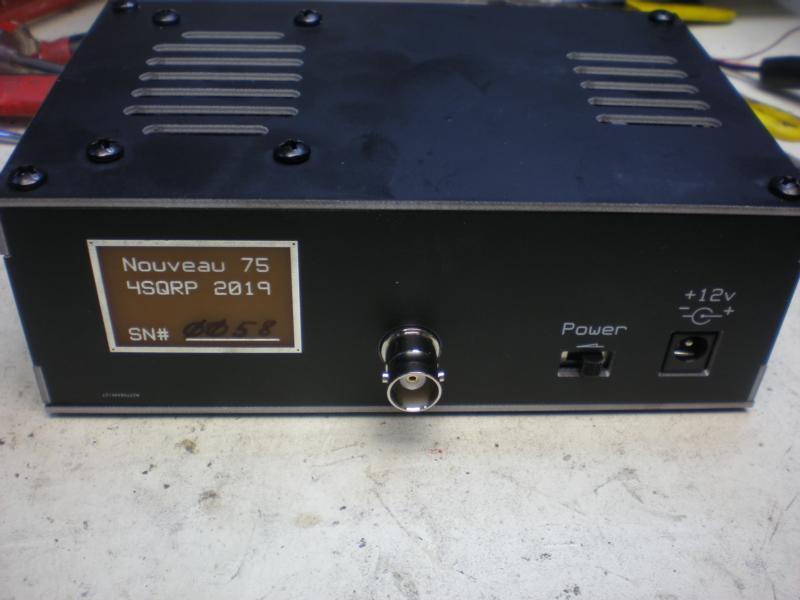 The silk screen marking is WRONG. Q2 must be installed this way! 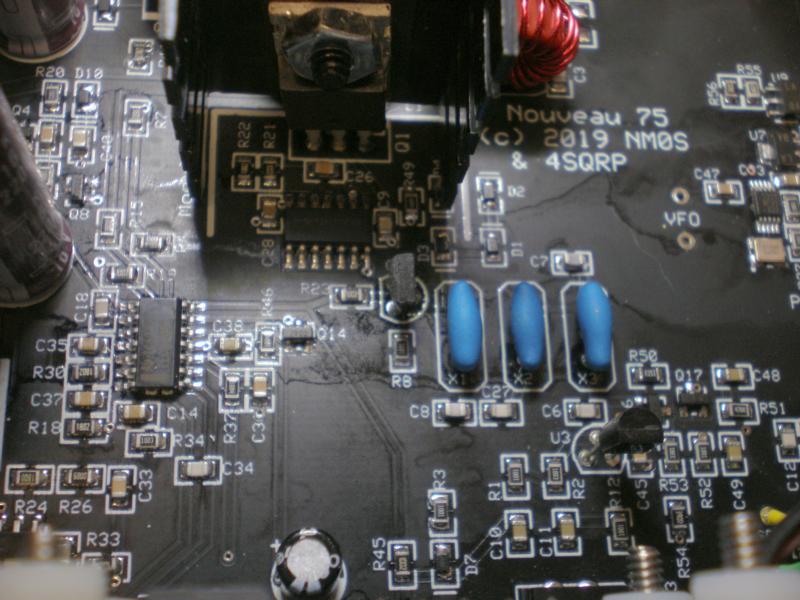 Most of the work is done for you! 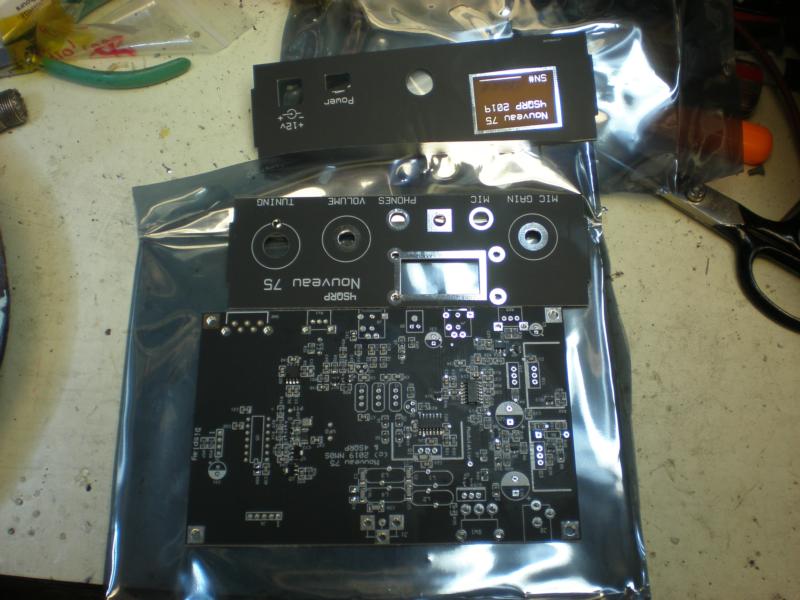 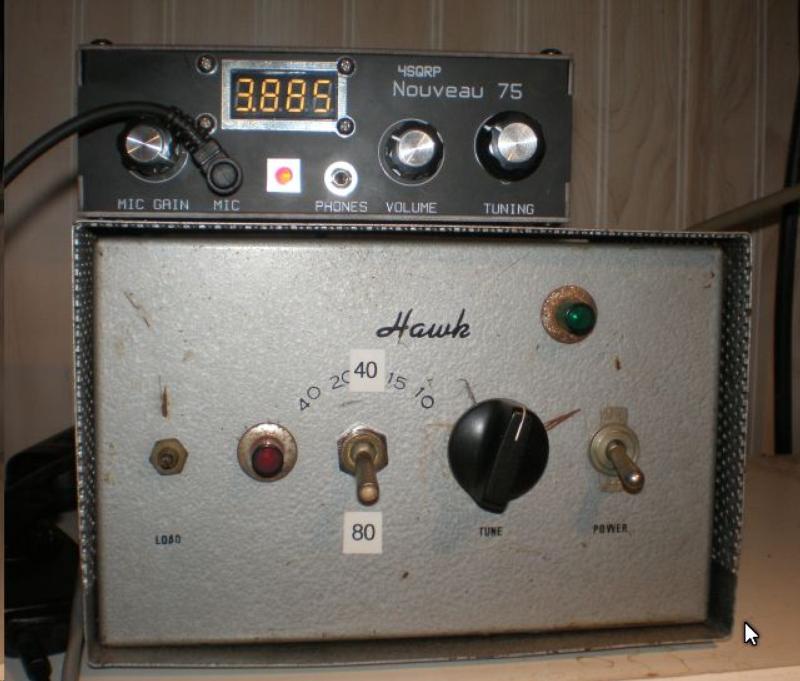 A rig you'll be proud to own! 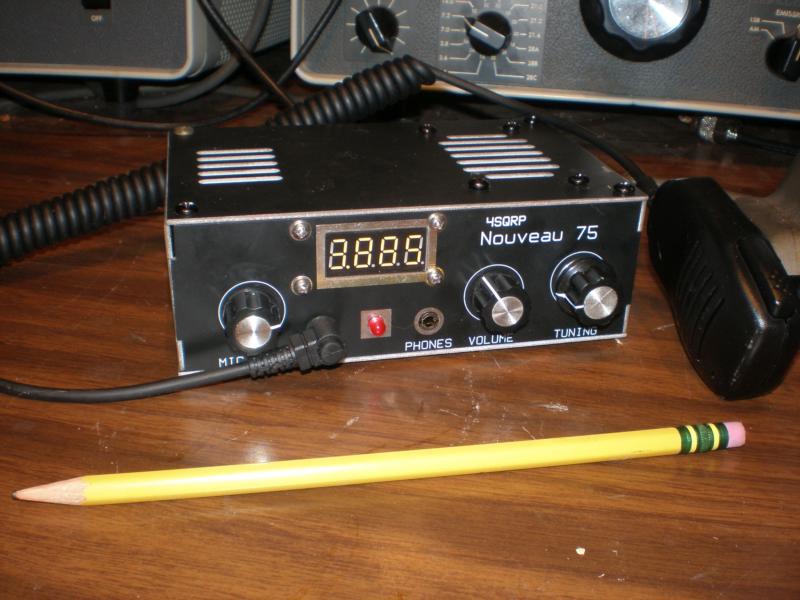 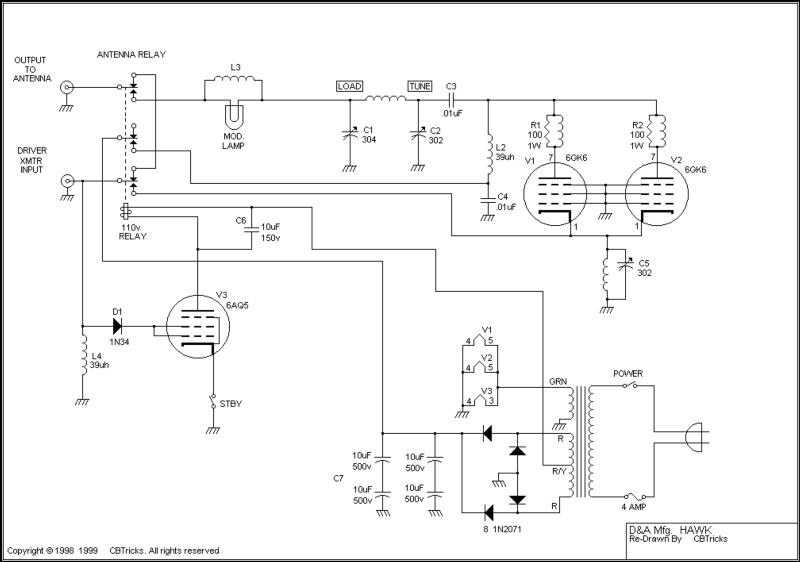 My experience with the Nouveau 75