In 1958, the Multi Elmac Company was riding high on the ham radio waves.   The company had seen an opportunity to provide feature rich but affordable transmitters and receivers to hams itching to "go mobile", which was all the craze.   Instead of sticking a converter in front of the car radio like many competitors did, Elmac produced full-blown receivers that tuned all the amateur bands.   Their first transmitter, the A-54, covered only the popular mobile bands but the subsequent AF-67 and 68 covered all bands, and while the 68 swapped the 160 meter band for 6 meters, both had built-in VFOs and high level plate modulators.  Judging by how many are still in use and available today the company's bets were well placed.

The 1950s also saw a resurgence in ham radio clubs as the booming post-war economy produced not only a bit of disposable cash but leisure time.   And one way American hams wanted to spent both was cruising in their automobiles, with a ham station under the substantial steel dashboard.    After the 11 meter band was turned over to the new Citizens Radio Service in 1957 hams converged on 10 meters for local ragchews and with a quarter wave whip only 8 ft. long the band was ideal for mobile operation.    Public service was a big part of most ham clubs activities and with 10 meter mobile stations, real emergency communications became possible.

The CD-10 was a 12-tube transceiver with a full superhet receiver with a 1600 kHz IF, noise limiter, and squelch that was built on a printed circuit board which was pretty new technology at the time. The receiver had it's own audio stage and did not share any circuitry with the transmitter, making the CD-10 a transmitter-receiver in one box rather than a true transceiver.

The simple transmitter used a 12AT7 crystal oscillator/multiplier and a 6AQ5 final amplifer, which would have been pushing hard to make 10 watts input. Another 6AQ5 provided modulation using a carbon mic which may well have been “requisitioned” from an old telephone in many cases. A relay provided push-to-talk operation which would have been a big plus for mobile operators.

Bob Blau K8DJR, was involved in the distribution of about 50 kits to club members which were put together by Elmac and assembled by club members. Bob remembers how the hot solar cycle of the late 50's made it possible for many members to work 10 meter DX from their cars.

Bob also customized his CD-10 – see the scan of his hand-written list of modifications:

The real focus of the CD-10 project was emergency communications and the CD-10s made it possible for Detroit-area hams to run a weekly civil defense net and provide communications for various events. Rex WA6GYC reports one example:

“They were used to provide communication for the Gold Cup Hydroplane Races on the Detroit River !   The hydros were running WWII fighter plane engines such as the Rolls Royce Merlin and Griffon engines…they were also called Thunderboats due to the extremely loud exhaust, resembling thunder !!   At the time they could hit about 150 miles per hour on the Detroit River.  The course was from the Belle Isle Bridge to the Roostertail Restaurant, so named because of the huge rooster tails of water coming off their stern when the boats would make their turn.    The unlimited  hydroplanes haven’t raced there for a while now, plus they converted over to military helicopter turbo shaft engines, the V12 fighter plane engines got too expensive to maintain .   They just don’t sound the same anymore!”

K8DJR shares some of his experiences with the CD-10:

“The rig was set up to be mobile by using the broadcast car antenna so it has an antenna connector to accept the standard AM car radio plug and no SO-239. The PI network would tune almost anything to 10 meters. We all used a Newtronics ball mount on the rear deck and a 96 inch stainless steel whip. Some of us ran 2 parallel 72 ohm coax leads to match the 36 ohm impedance of the quarter wave antenna. The noise blanker worked extremely well on AM in the days when you could hear Ford ignition systems a block away.

We used the rigs for Detroit civil defense nets and I was also one of the hams on the Detroit river for the Gold Cup boat races. (in the inside of the course with a 12 volt car battery and portable loaded antenna). We also had many hidden transmitter hunts with a CD-10 as the fox as well as the hunters. We also built “snoop boxes ( tuned diode field strength meter with earphones) to use with our loop antennas.”

Want to build your own CD-10 for the upcoming fun on Cycle 25? No reason it can't be done, maybe even easier if you use and existing power supply. The hardest part would probably be to find the 1600 kHz IF cans, but with a change to the LO the receiver could be converted to a conventional 455 kHz IF where AM BC radio transfomers could be used at the cost of image suppression (maybe). Toroids and trimmer caps could be substituted for the slug-tuned coils in the transmitter.

Thanks to Lea Salter K4VWD, the original 8-page construction manual can be downloaded from the link below the images. 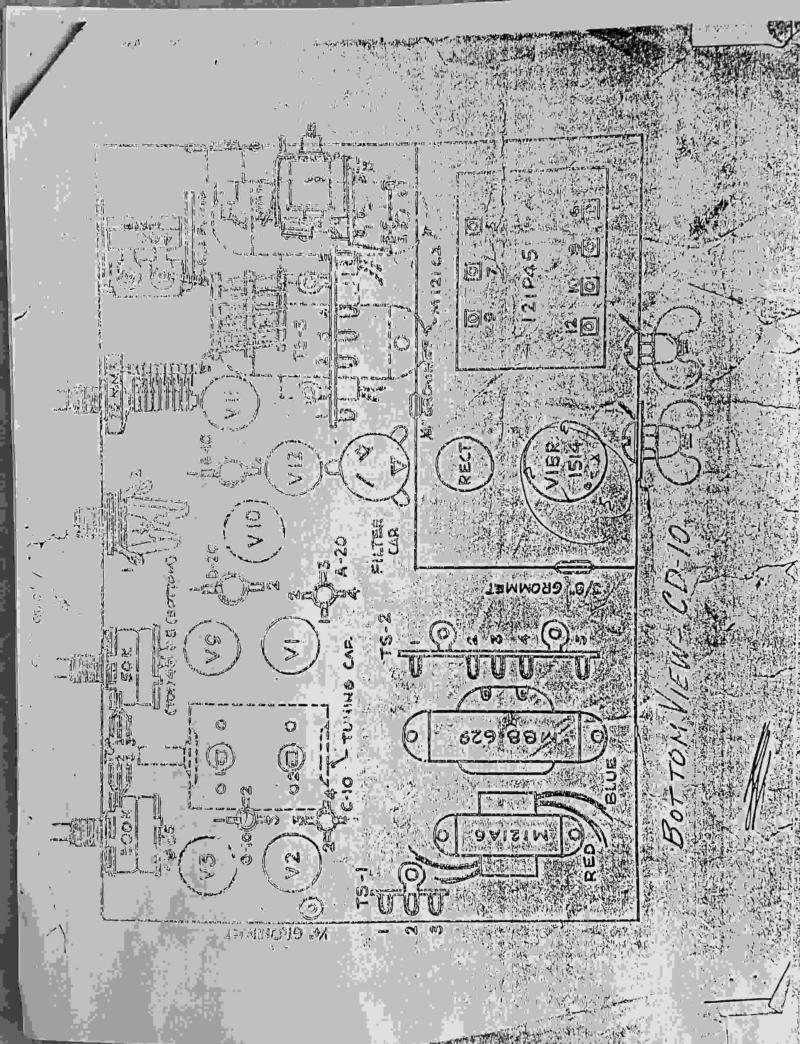 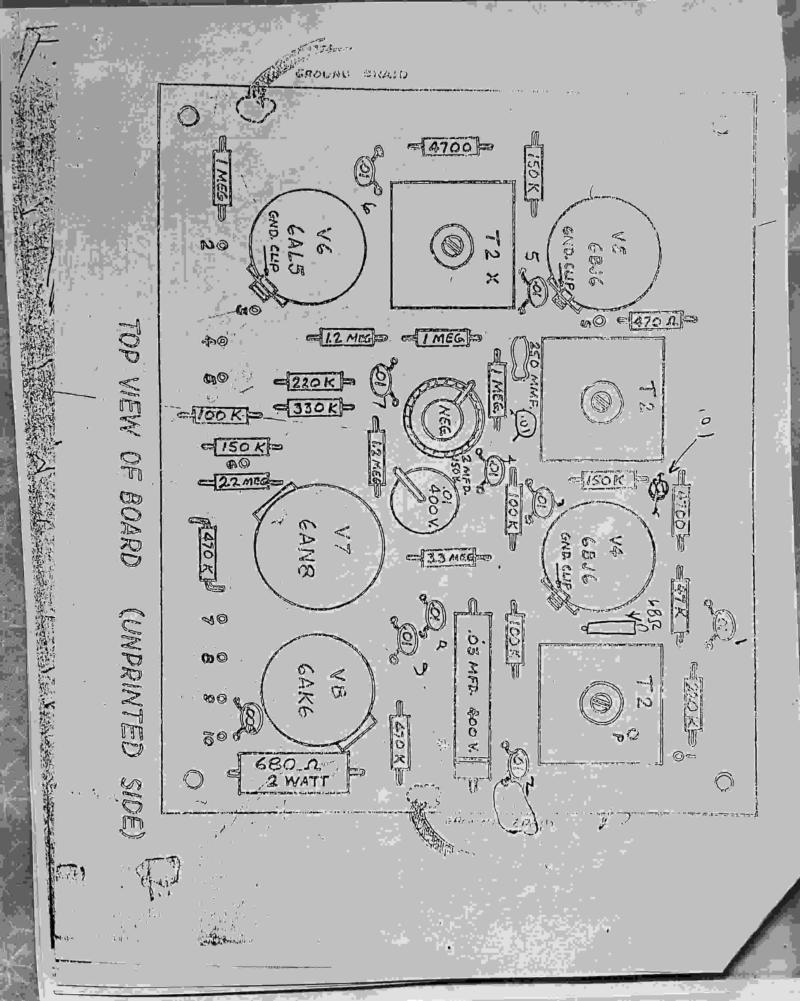 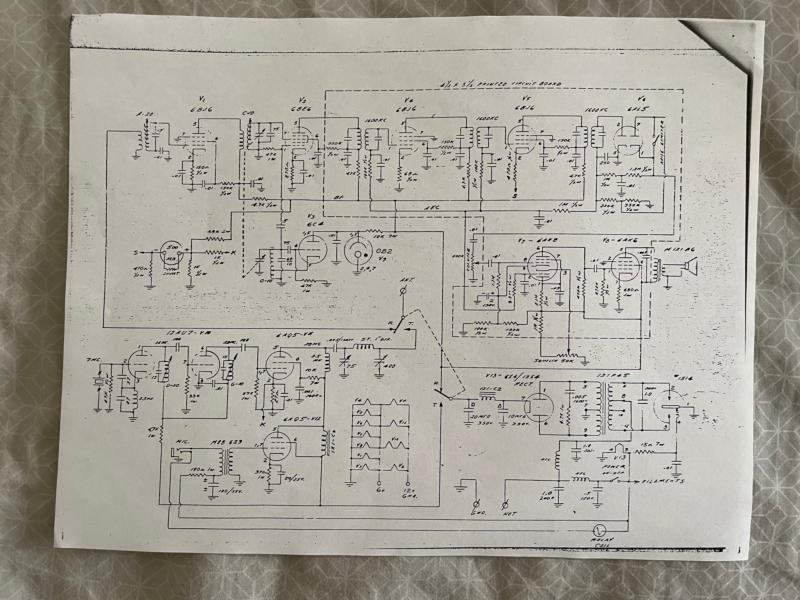 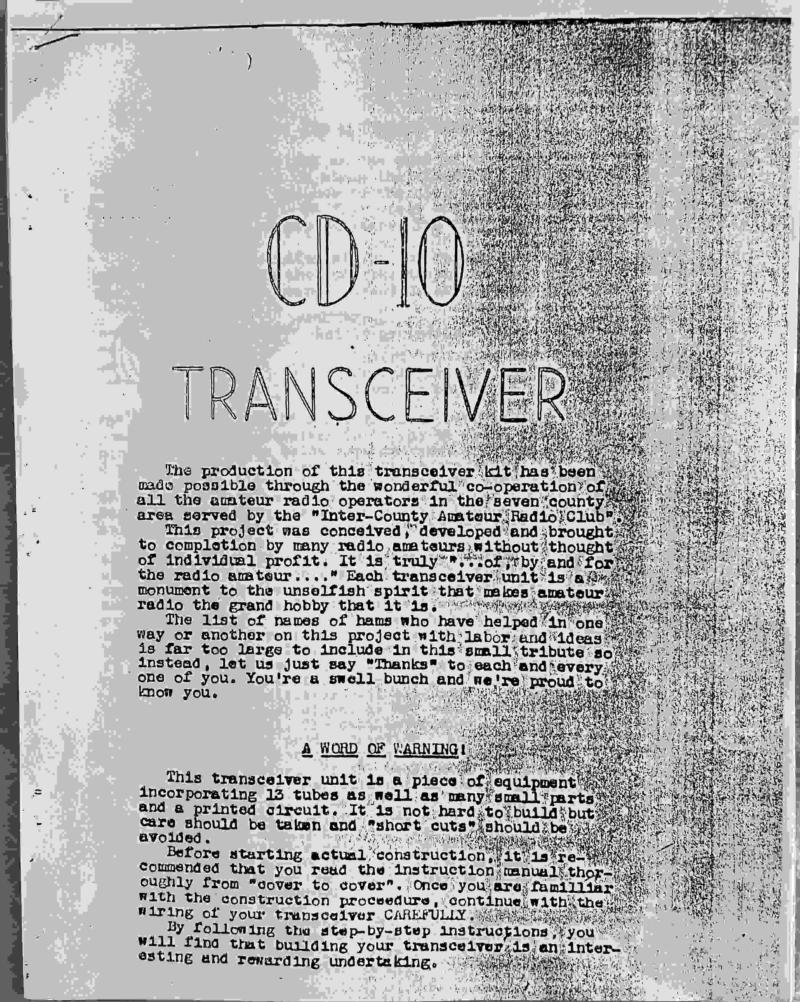 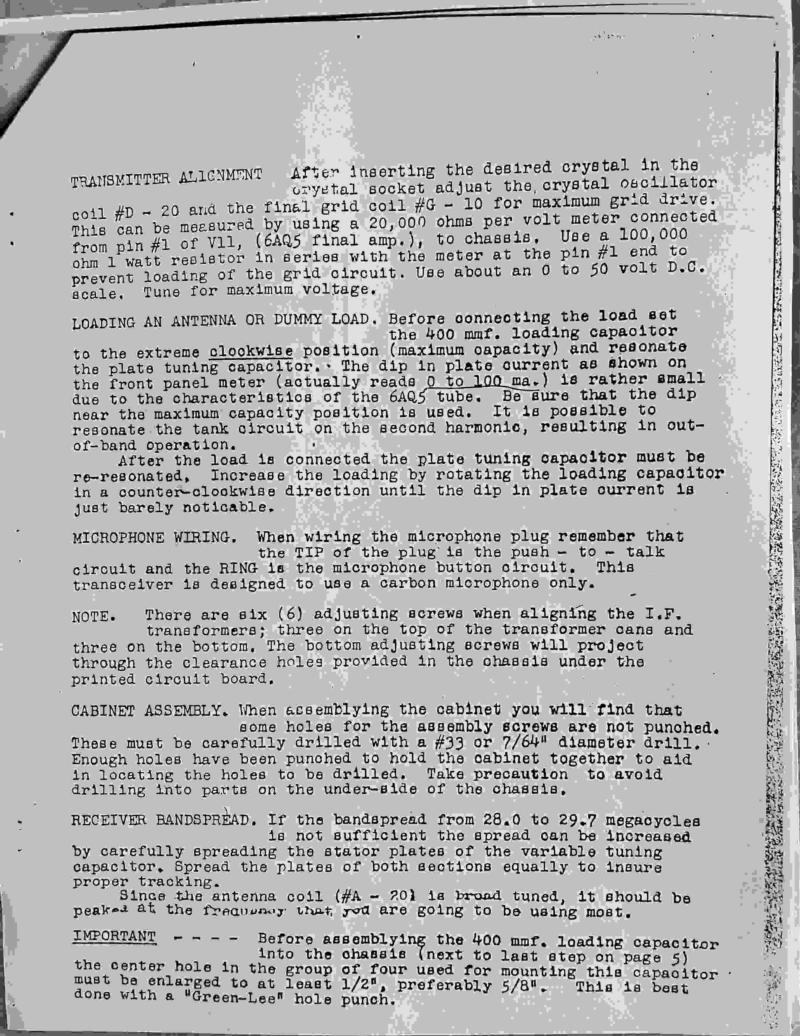 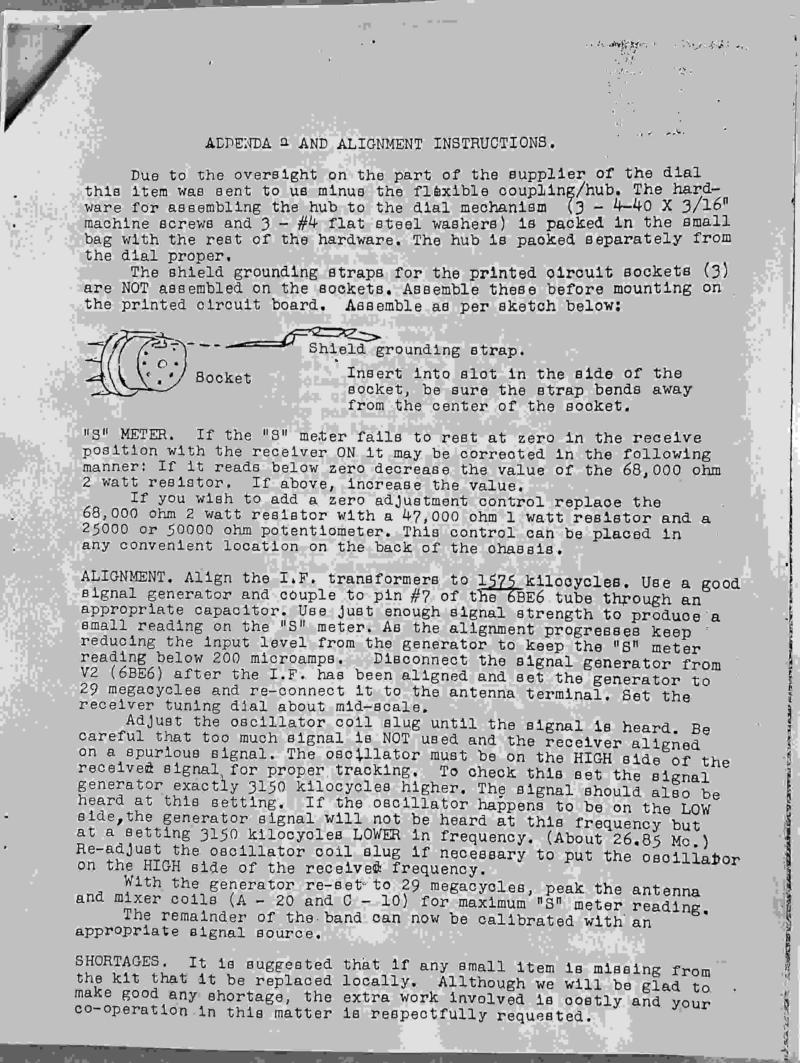 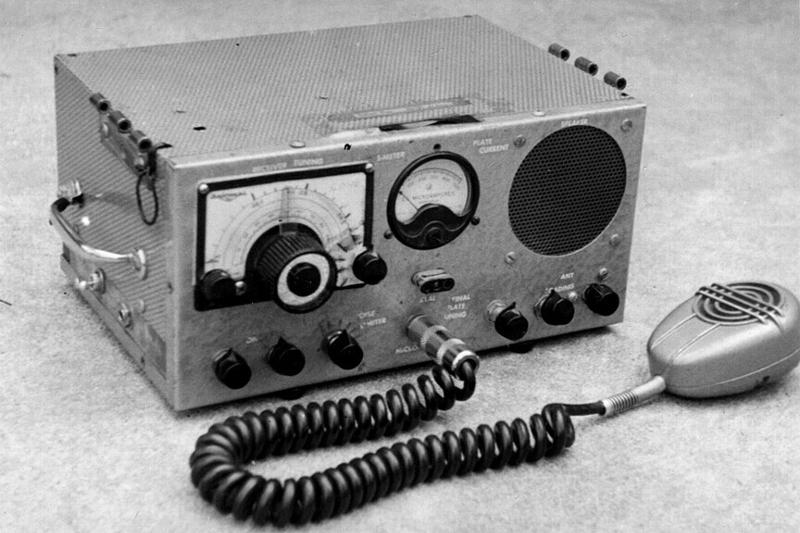 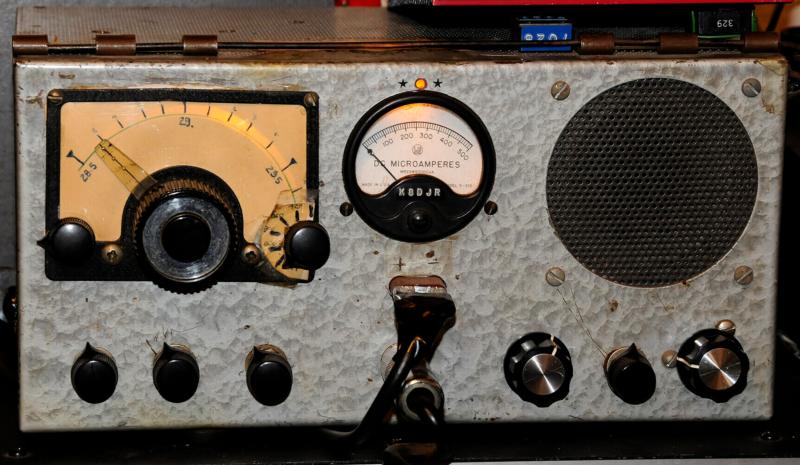 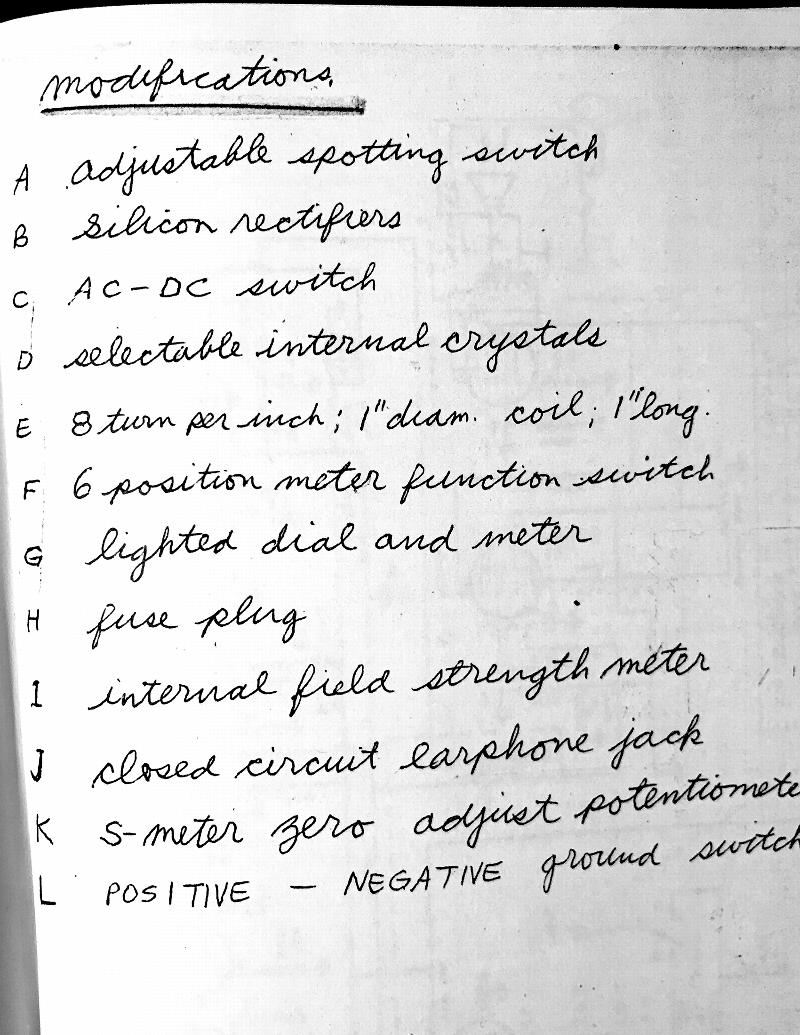 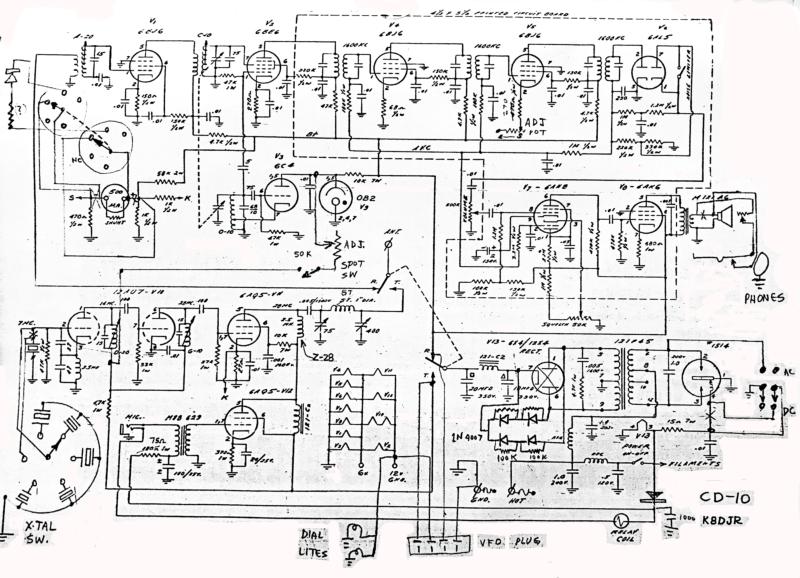 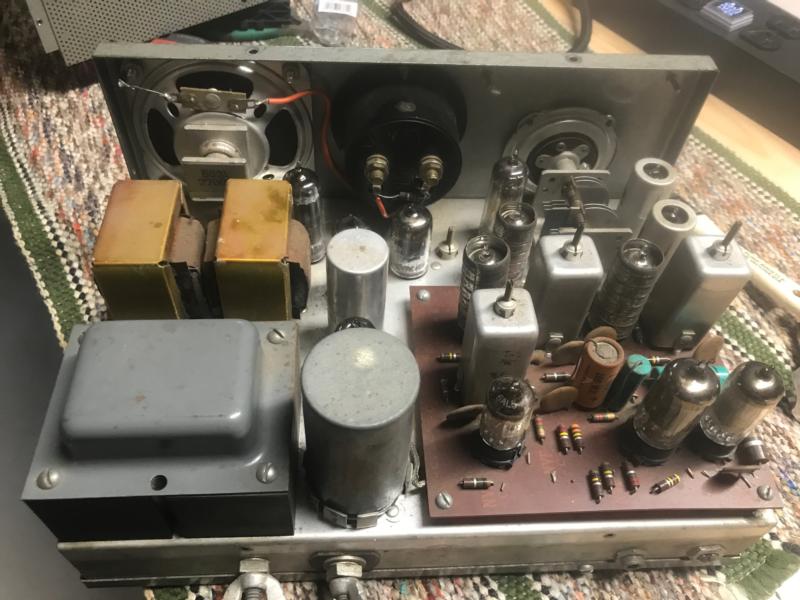 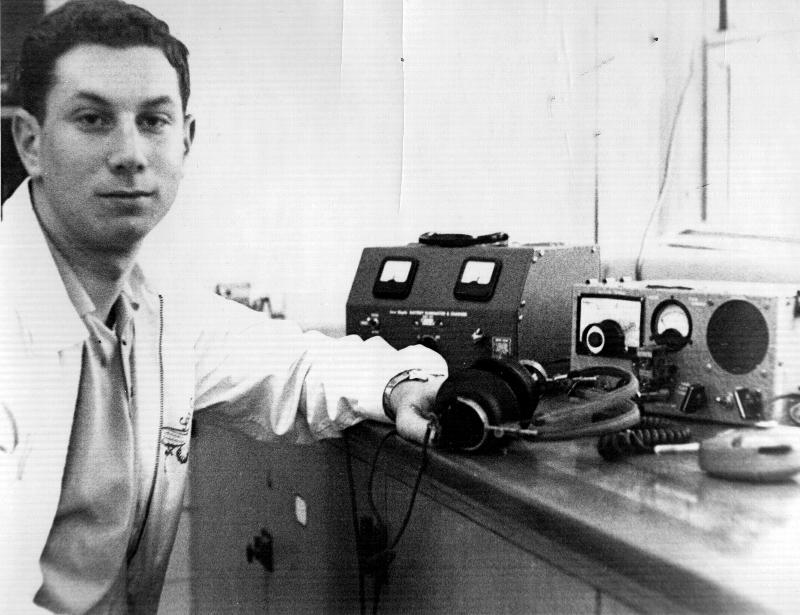 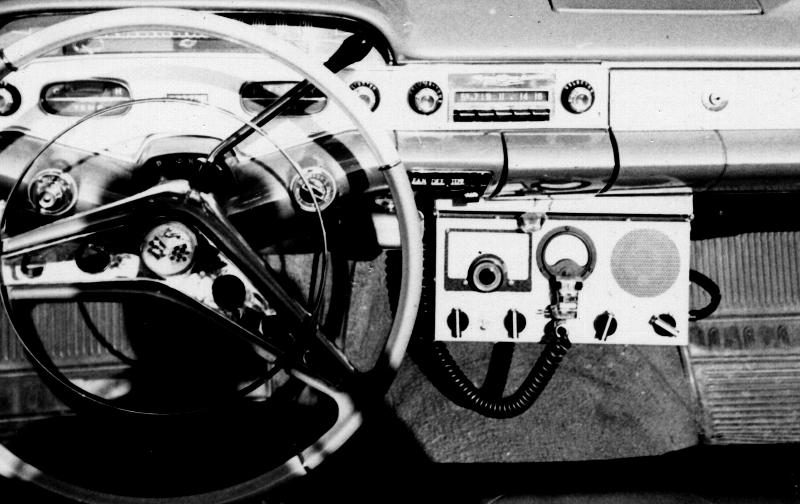