Marine radio from the early 1960s

Among it's early products, the Multi Elmac Company of Oak Park MI made marine band radios and other products for boats, including the Sea-Deep DM-1 depth indicator, the Sea-Fume SF-1 vapor detector, and the BC-1 Duo-Charger for 6 and 12 volt batteries.   Thus it's not surprising that the marine radio-telephone would be given a "sea" name:   the Sea-Rad model MM-50.    I'd found references to a model MM-25 and a model MM-88 but no details, but the MM-50 I picked up via eBay is a good example of a the kind of radio that was in common use in the 2-3 MHz AM marine band prior to the move to single sideband in the early 1970s.

The MM-50 name is probably derived from the 6146 PA tube which would produce 50 watts input on one of five crystal controlled channels.   The receiver is crystal-controlled per FCC rules, but has a tunable AM BC band position and includes an automatic noise limiter and squelch.   The power supply is external and it's unclear whether the $269 price in the 1962 issue of Popular Boating included the power supply or was just for the radio.

It's a well-built piece of equipment, reflecting the solid construction hams have come to expect of Elmac gear, with a carbon mic and pair of 6L6 modulator tubes and separate oscillator and buffer stages driving the PA - a more elaborate transmitter design than most boat radios use.   The transmitter delivers 35-40 watts to the antenna, however peak modulation was intentionally limited to about 80%.      The receiver uses 8 tubes with an RF stage providing sensitivity of 1.5 uV on the marine band and plenty of audio.

All marine radios are channelized and since power output and sensitivity could vary a lot across the band, separate tuning adjustments must be provided for each channel.  On the typical cost-conscious design this is done by positioning clips on the plate tank coil which is cheap but time consuming for the technician.   The MM-50 offers a deluxe solution with separate slug-tuned tank inductors for each channel requiring only a screwdriver to adjust, along with individual buffer stage tuned circuits for each channel.    On the receive side, separate antenna and mixer tuned circuits are provided for each channel, accounting for the "forest" of shield cans on the chassis.   The MM-50 was clearly not designed to be a low-end radio!

An owner of other Elmac gear will note the similarity to ham gear - the transmitter is like an AF-67 without the speech amp and not surprisingly the receiver borrows from the PMR-7.     It's technically incorrect to refer to the MM-50 as a "transceiver" since there are no circuits in common - the receiver even has it's own audio output stage rather than using the high-powered modulator.    The MM-50 is a transmitter-receiver in one box with a single control to select the channel of operation.

Given the obscurity of the radio I was very surprised to find a copy of the manual, which is very helpful in understanding how to modify it for the 75 meter ham band.    Since inexpensive crystals were available from N4ESS for 3880 and 3885 kHz they were used and the transmitter retuned according to the manual instructions.    The receiver local oscillator injection frequencies are produced by a pair of Epson programmable oscillators installed in one of my RAN Technology Four Channel boards.   A voltage doubler tacked onto the 6 volt filament line produces the required DC voltage.     Since I don't even know what the Elmac power supply looks like, I wired up a cable to my modified PS-2V power supply that otherwise is used with other Elmac gear.   (It's been modified to include a PTT-operated relay that switches the HV on/off and feeds low B+ (250V) to the receiver or transmitter as required).   The usual finagling was required to get PTT relays working properly but overall the manual and open layout of the MM-50 made conversion easy.   As always, the antenna loading inductor is bypassed since the radio is used with a 50 ohm antenna and the channel selector switch wiring was modified to select the desired programmable oscillator frequency.   These "ad-hoc" modifications require adaptation to the specifics of a particular radio but aren't hard to figure out even without a schematic (as is usually the case!).

The modulator includes an "audio range restricting filter" to provide greater "talk power", according to the manual, and a specially-designed modulation transformer limits the modulation to 95%.   In my case, having tried a couple of different carbon mics, the limit seems to be a bit lower - like around 80% - but I'm not inclined to try to make a boat radio sound like a broadcast station!   Marine radios were designed to be easy to use by unskilled operators and rugged enough to get the message through even with challenging medium wave propagation and static.

As far as it's original application goes, dymo labels on the panel indicate the original callsign was WL-5054 (I haven't determined if that is a legitimate marine callsign or not).  The letters "WAN - JON" also appear, but their meaning remains a mystery.      Cabinet wear and tear prove this was a working radio and since it came from a Michigan seller, my guess is it came from an ore hauler on the Great Lakes.    At least that's as good a working theory as any, and it gives me an excuse to put the MM-50 on the air each fall when "the gales of November come early" in recognition of the ill-fated Edmund Fitzgerald.

Lots of interesting information about MW marine radio can be found at this site:  Inland Marine Radio History Archive

VINTAGE TV:  Watch for free as the Anderson family intercepts a marine band radio distress call in this episode of "Father Knows Best" 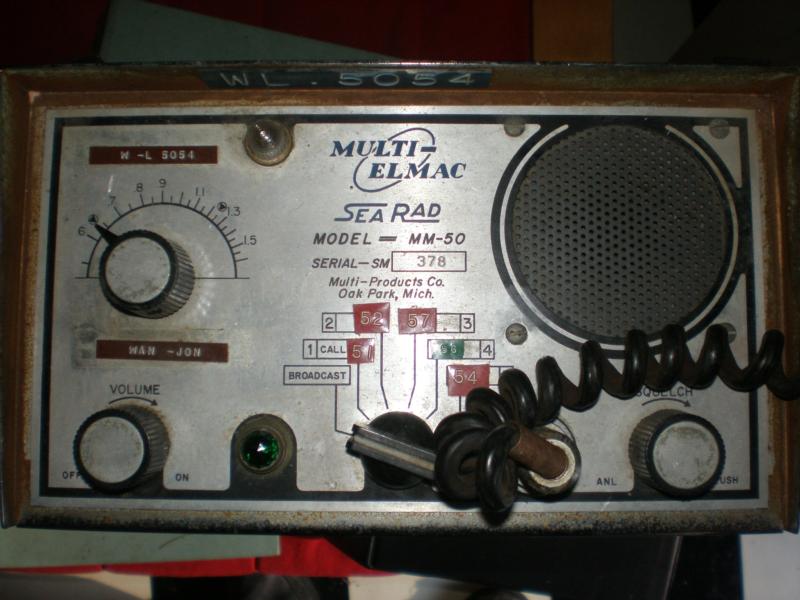 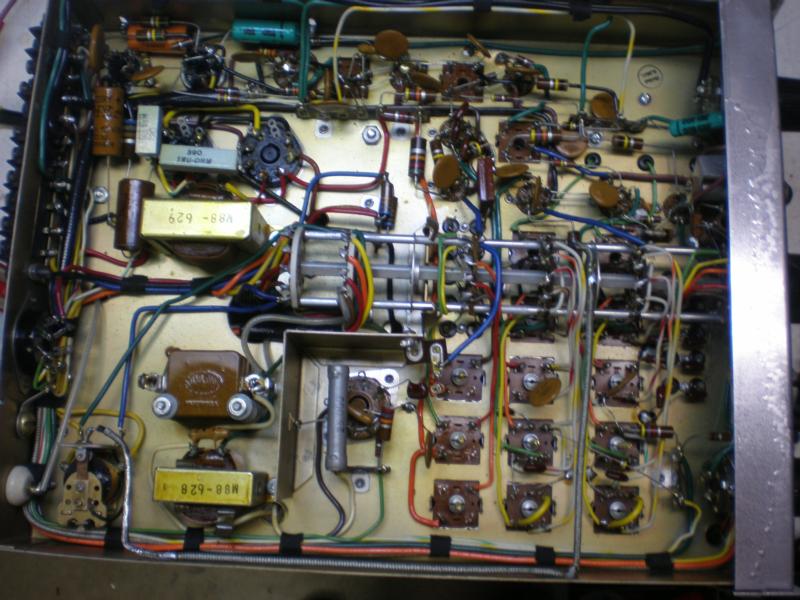 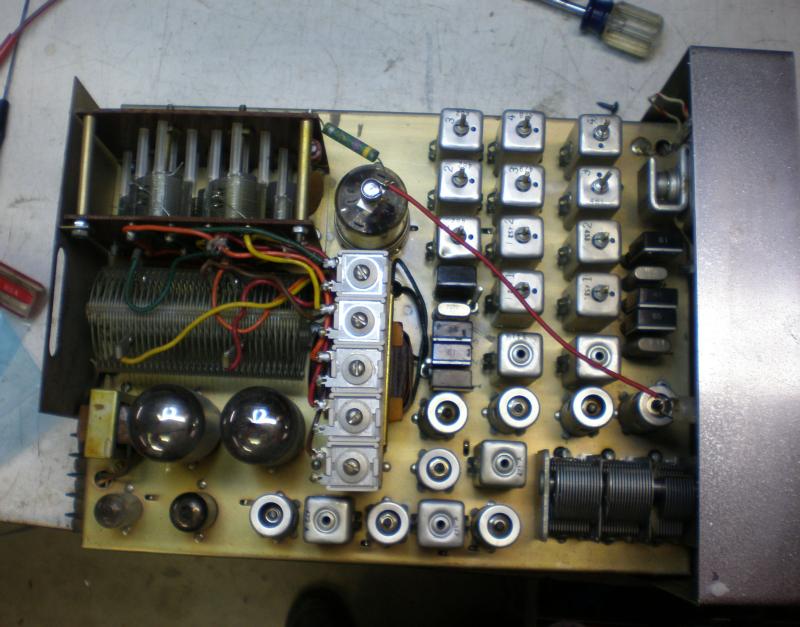 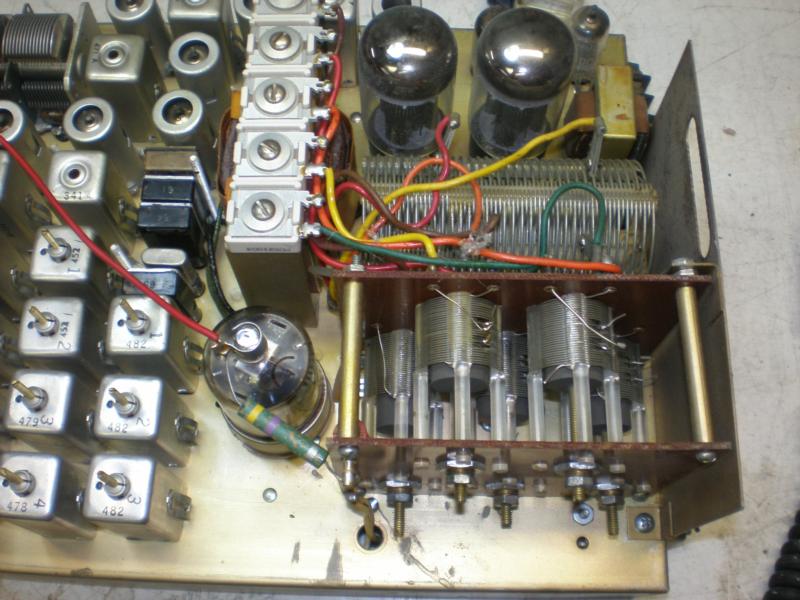 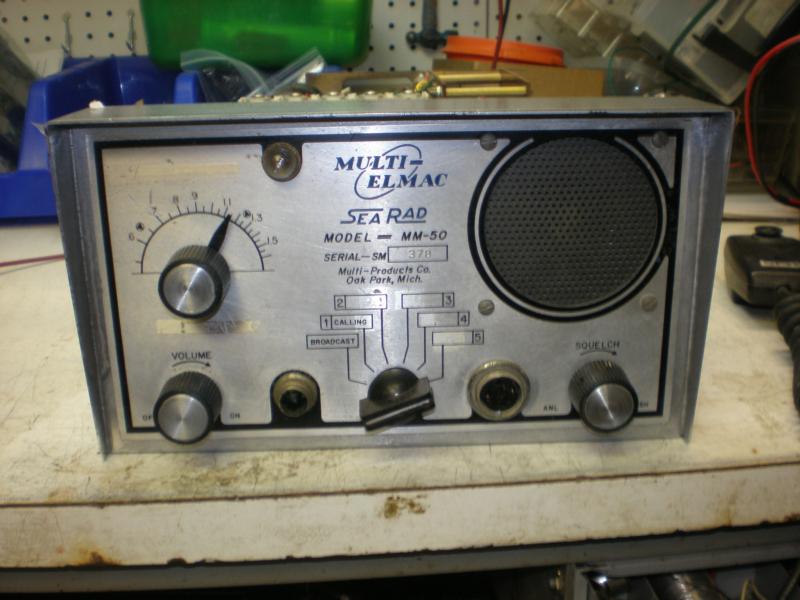 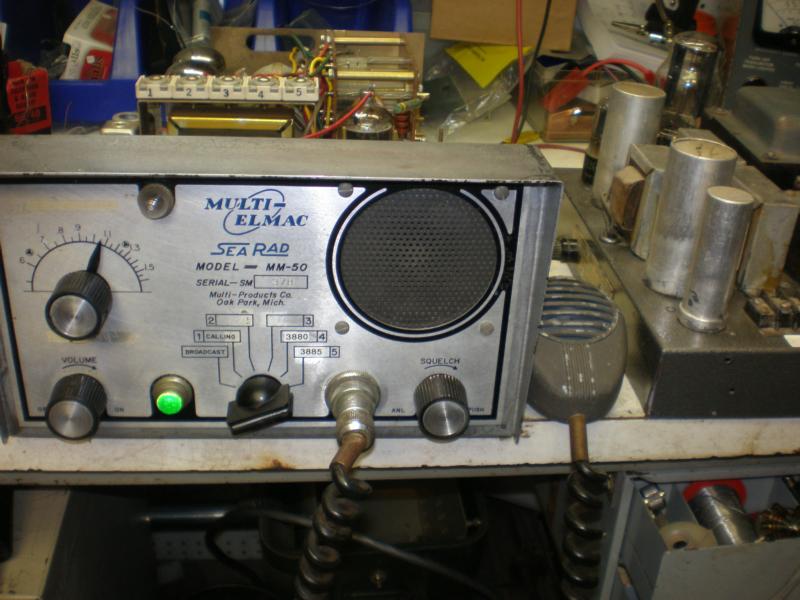 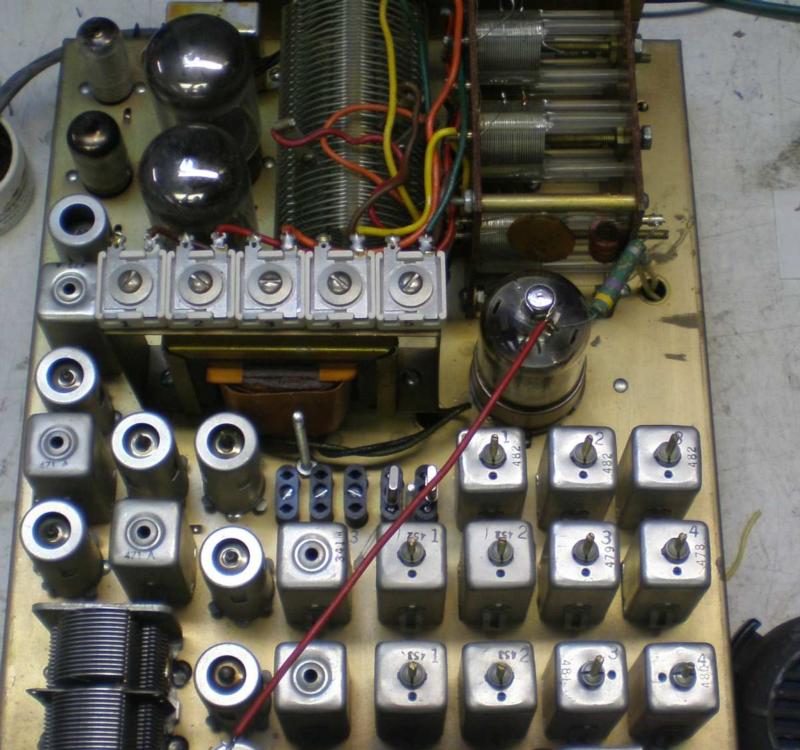 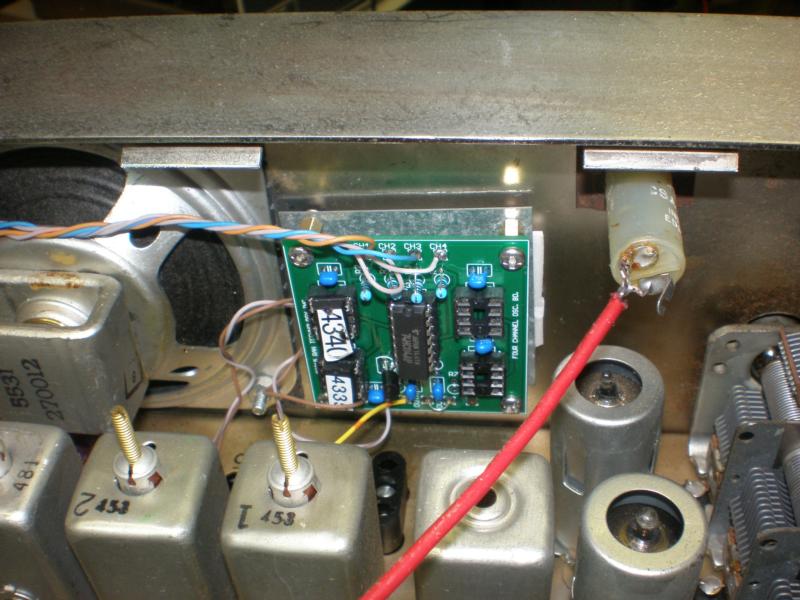 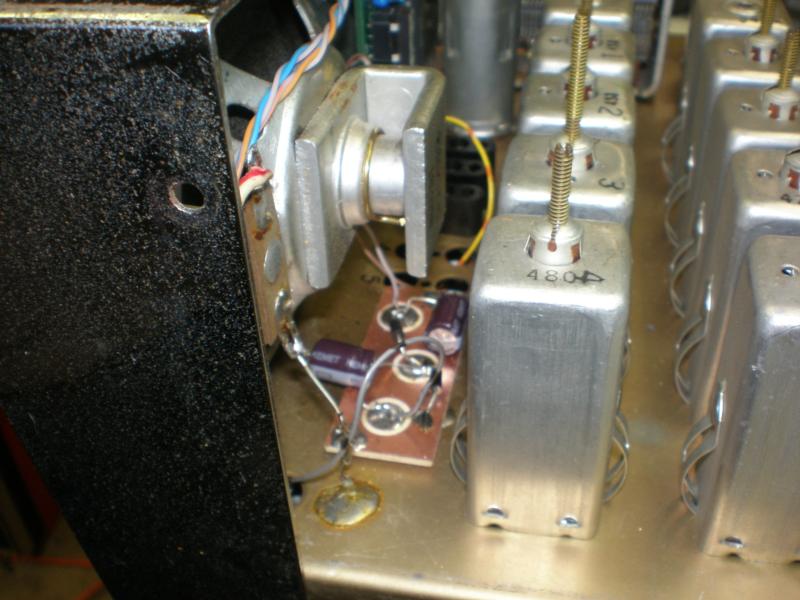 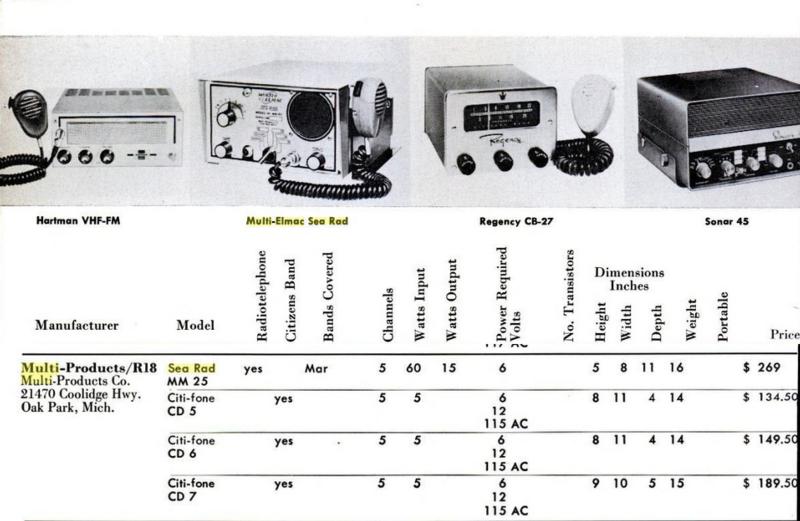 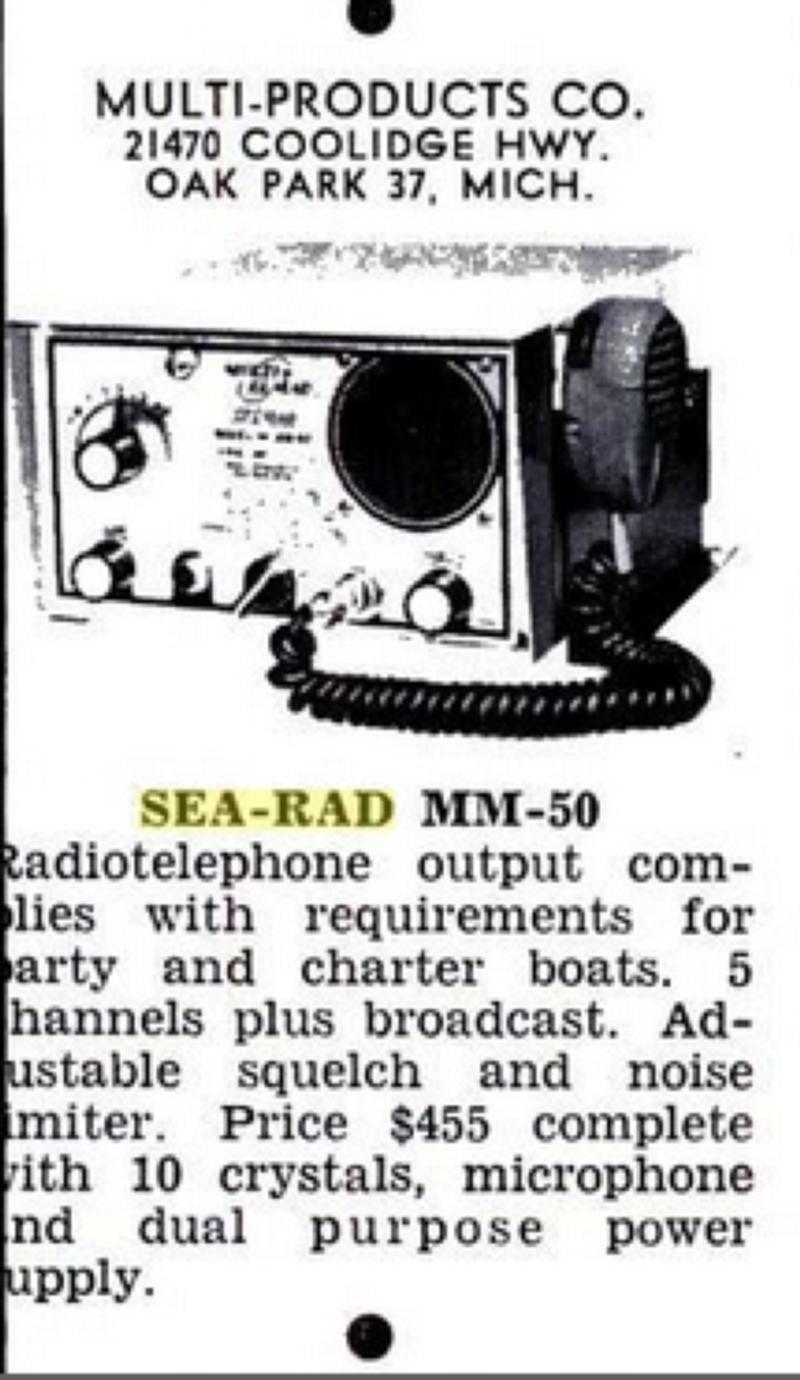