What can I say, I like oddball radios!    There was already a different version of this CAI SSB-125 on my shelf but it had the remote control head, and this one was cheap, well under $100 including shipping, and I'm easily amused.

Communications Associates Inc. was a supplier of commercial, military, and marine radios based in Huntington Station, NY but I haven't found much about the company.    Like many others, they developed products for marine SSB communications but the CA-125 is something of a transition product in terms of technology.   Originally this type of radio was channelized, that is, each individual channel had it's own crystal and transmit and receive tuned circuits, often on plug-in board called "channel modules".    Since each module had a limited tuning range, a half dozen or more were needed to cover the HF bands from 2-18 MHz used for maritime communications.    And since the marine bands don't correspond with ham bands, repurposing these radios usually requires modifying the channel boards.

Later radios incorporated digital synthesizers and a set of bandpass filters just like ham rigs of the 80s and newer did.   Changing frequencies might require reprogramming a diode matrix, EPROM, or maybe just entering new values from a keypad, so this type of radio is a lot more ham-friendly.

The CA-125 is somewhere in between.   It uses crystals for frequency control, but adds unlike most it's a double-conversion transceiver with a first IF at the oddball frequency of 1143 kHz and the 2nd IF at 457 kHz.   But rather than using crystals that operate a fixed frequency above or below the desired operating frequency, CAI used crystals at four times the needed frequency, and some digital logic to divide down to the needed frequency.   I'm not sure what advantage this offered, as it's unique in my experience with this type of radio.

But the rest of the transceiver is broadbanded, so no channel modules are needed, just jumpers to select the correct set of filters.    The 1143 kHz IF is unique as well,  using a crystal lattice type filter.    Another unique aspect of the CA-125 is that all tuning is done by voltage-variable capacitors (varicap diodes) controlled by trimpots.   At least that bypasses the problem of breaking a core in a slug-tuned coil!   The five plug-in varicap-tuned filter boards for the exciter and receiver are double-tuned circuits with cup-core inductors and small air variables to set the bandwidth - certainly not the cheap way to go!   As can be seen from the photos, the quality of components and construction is top-notch throughout, reflecting the company's desire to sell to demanding users such as the military and commercial SSB users at the time.    However it's likely that marine SSB was the main market as per an ad from a 1977 yachting magazine.  This unit came with a full bank of crystals and the channel knob indicates these included San Francisco, Seattle, and other marine ship to shore stations.    Some required two crystals due to the use of duplex operation, and any channel could be set for AME mode which was required for the emergency frequency of 2182 to make it possible to hear distress calls from old AM-only radios that might still be in use even after the official transition to SSB.

Output power is 125 watts with reed-relay switched low pass filters.   Since it's a double conversion radio, I've used one output from my digital VFO board to replace the crystals for continuous coverage across the ham bands, and another to generate the first mixer injection.   By selecting between 1143 and 2057 kHz either upper or lower sideband is available, along with AM.    The tiny VFO board is mounted near the oscillators and controlled by an external controller via I2C.   Since this radio had a 9 pin D connector on the auxiliary panel that was once used to connect to a telephone type remote, I repurposed it for the digital VFO controller.    With this approach I have set two channels up for each ham band from 160 thru 17 meters, one tuned to the lower and the other to the upper part of the band as the bandwidth is 100 kHz or less.  If I want more I can use the 12 "B" position frequencies within each band.   When I set up a mil or commercial radio with this VFO, the channel switch on the radio is used to select the desired band on the radio and  a separate button on the VFO controller selects the desired range for tuning.    Since the clarifier knob originally pulled the 1st LO a few hundred cycles either way for voice clarity it no longer has any effect with the digital VFO, nor is it needed since the digital tuning steps can be made as fine as I wish.

The other SSB-125 I have has a motor-operated remote channel selector with only 5 channels where were configured in the 5-6 MHz range, but it still has the full 2-18 MHz filters internally, so it will be converted to ham band use as well.

I was happy to learn that a separate AM detector is provided along with continuously adjustable carrer level and unlike many marine SSB radios, both sidebands are transmitted.   Received AM quality is quite good and the 60 meter tuning is close enough for WTWW and WWV to come booming in for shortwave listening.   The aux panel slide switch original used to enable the remote is now used to select the AM mode.

Despite being crystal controlled, the broadband design of the CAI make it well-suited for conversion to amateur use.  I think it's a great looking radio too!

After using the CAI on my bench for listening for over a week I continued to experience one annoying problem.  After some time of being on, it would refuse to transmit.   Tracking the malfunction down to the driver board gave me the excuse to disassemble the PA unit from the rest of the radio, which turned out to be rather cleverly done.   All connections are made via a pair of 25 pin D connectors and two coax cables for RX and TX signals.   So it was very easy to separte the two using a 25 pin ribbon cable to interconnect them for testing.   I discovered a signal labelled "PAD" which I deduce might mean "PA Disable" would eventually float high, turning off the driver.   The source of this signal was the power sensing circuit at the PA output, and after determining that a 10K pull-down would keep the problem from happening I left it at that.  I suspect one of the switching diodes may be leaky but since I'll be using it with a matched 50 ohm antenna I should be OK.   Back on went the covers...

And of course the radio refused to power on the day before I intended to use it on the air for the first time.   There are charge pumps that convert the 12VDC into +20V and -10V and the -10 was dead.   Normally radios of this vintage suffer from "tantalumitis" but tantalums usually fail shorted and these were fine.   But low voltage electrolytics fail the same way that high voltage ones do, and an ESR check showed two that needed to be replaced and one was also warm to the touch which confirmed the diagnosis.    Now the radio is playing again and hopefully will do so for a while.

Suitably the SSB-125 made it's return to the airwaves for the first time in decades on the Vintage SSB Net on May 30th, and even more appropros, on a day when "Captain Rick" N9RK was at the helm.   Since Rick plies the waves of the southeastern Wisconsin lakes himself, I knew he'd appreciate the idea of this beauty adorning the cockpit of a cabin cruiser, keeping the skipper and his guest in touch with home, no matter how far from shore they roamed!

Digital VFO board installed in the radio 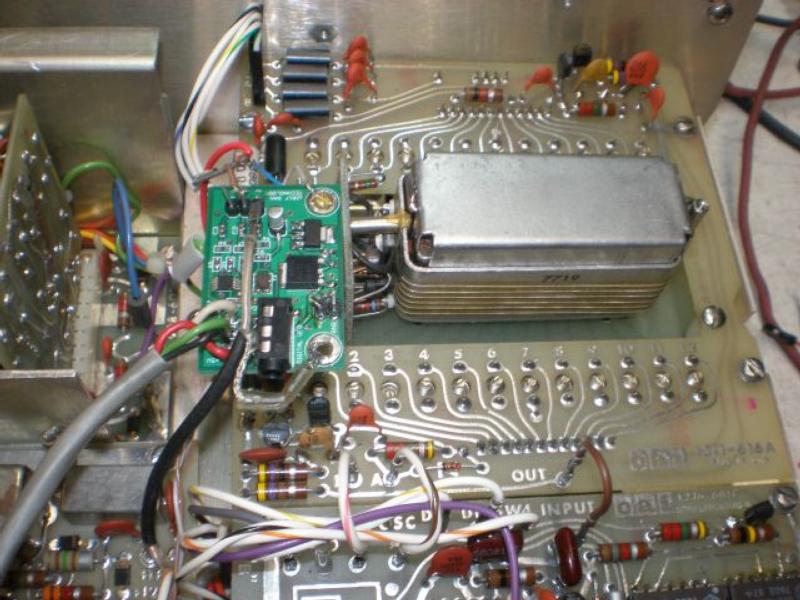 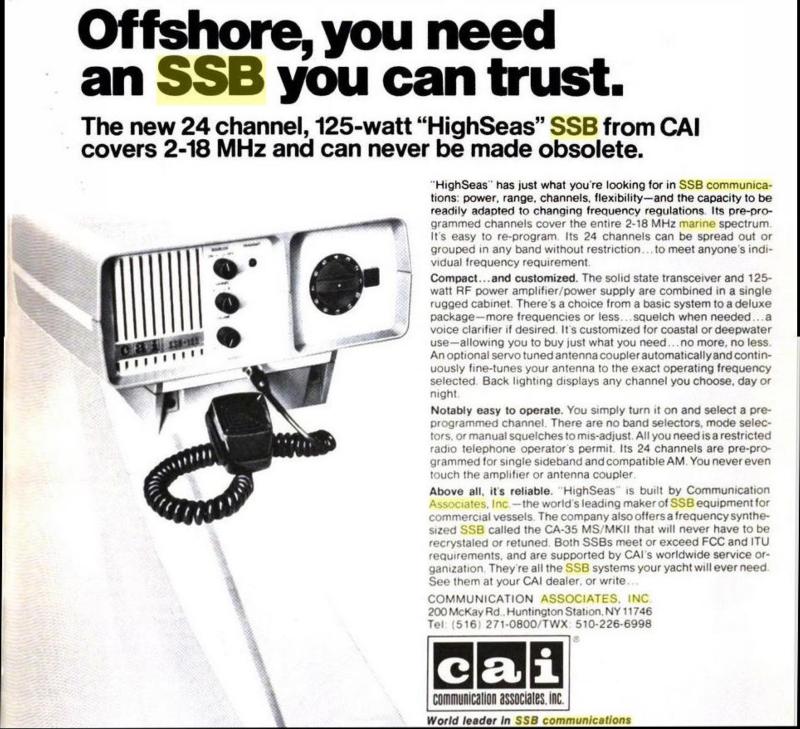 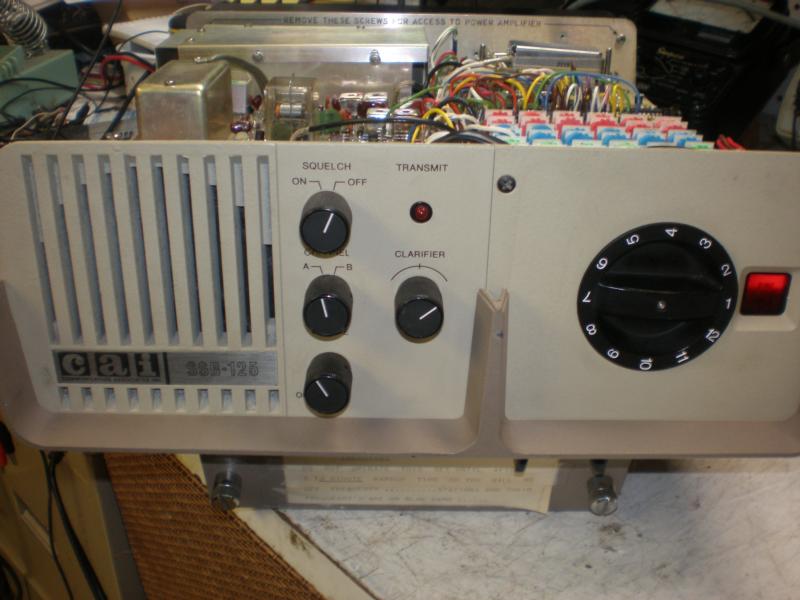 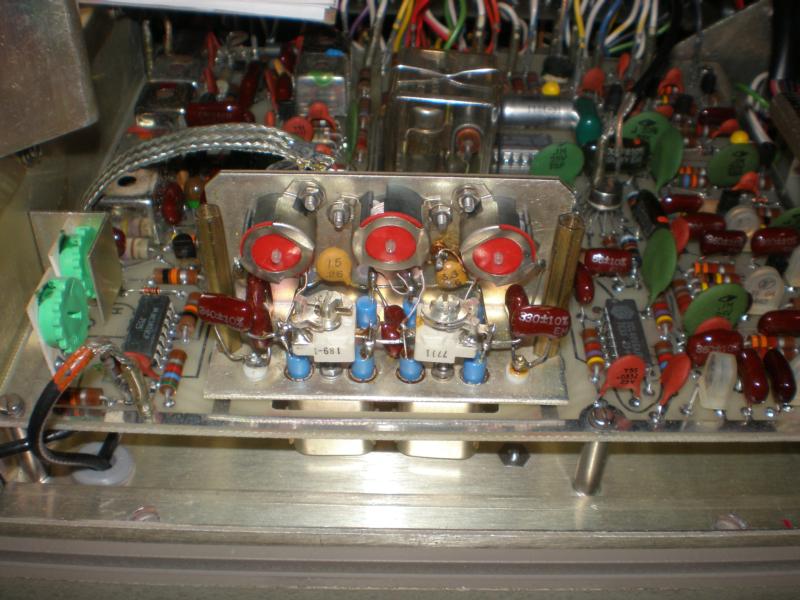 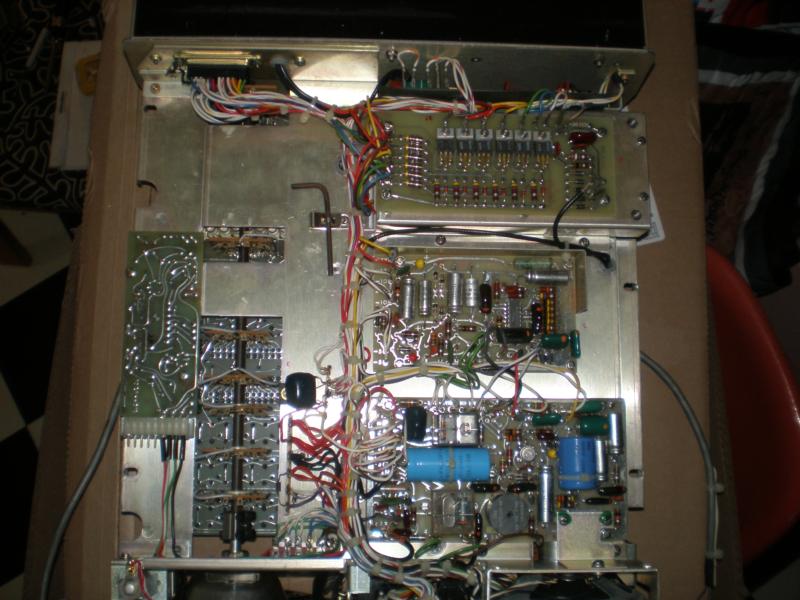 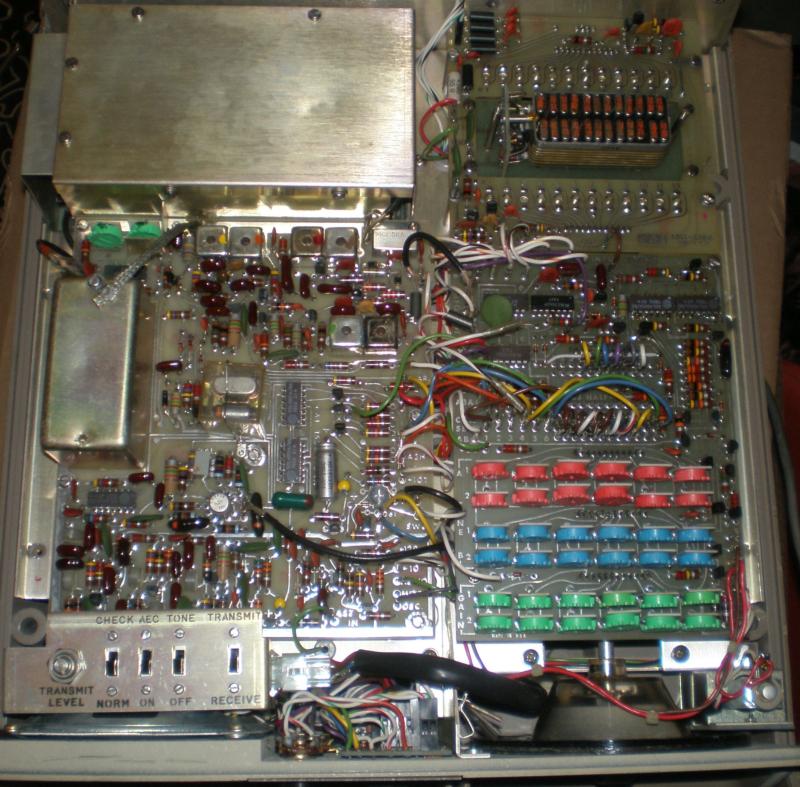 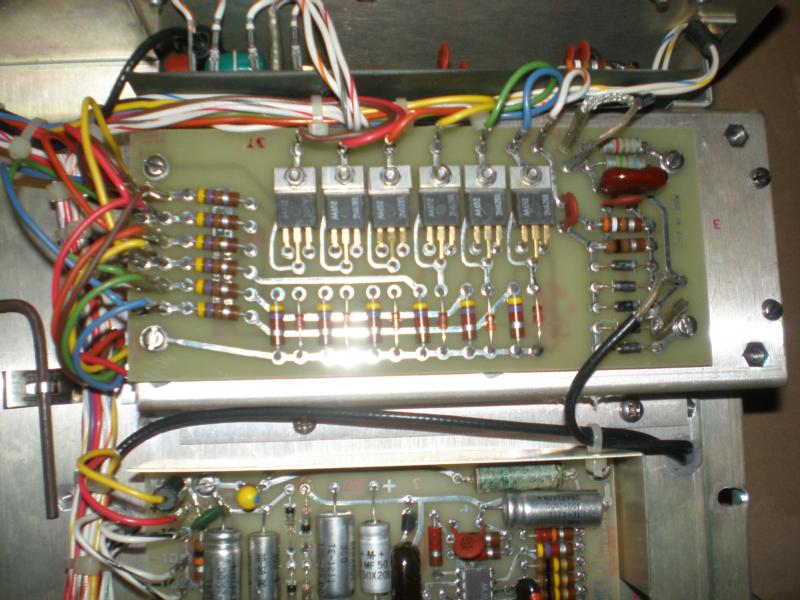 Gain and tuning trimpots for each channel 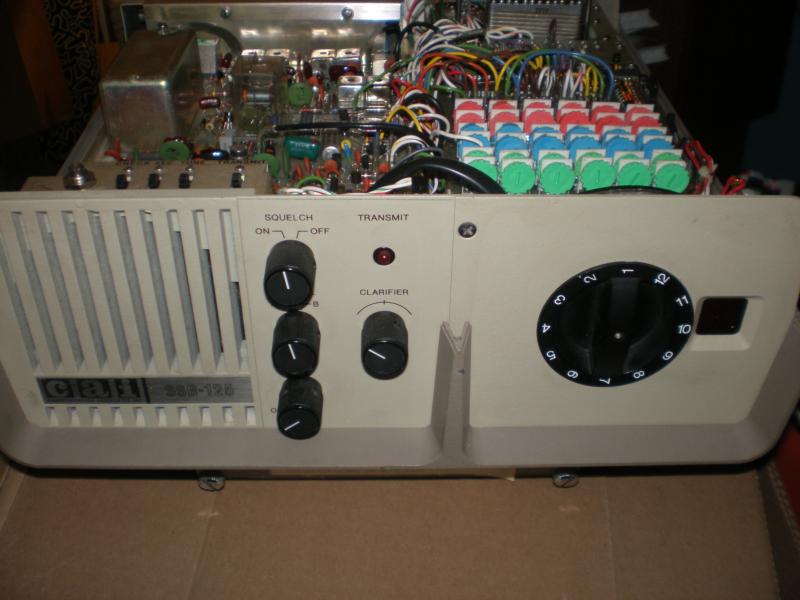 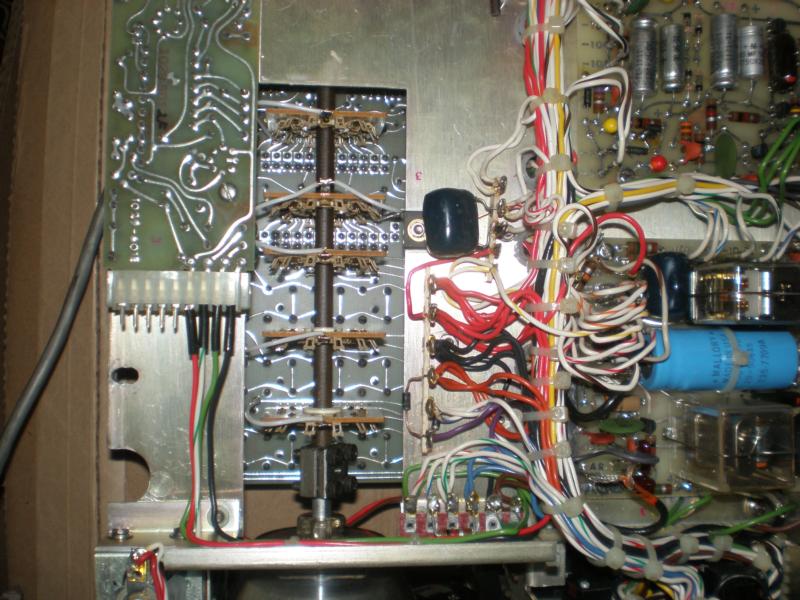 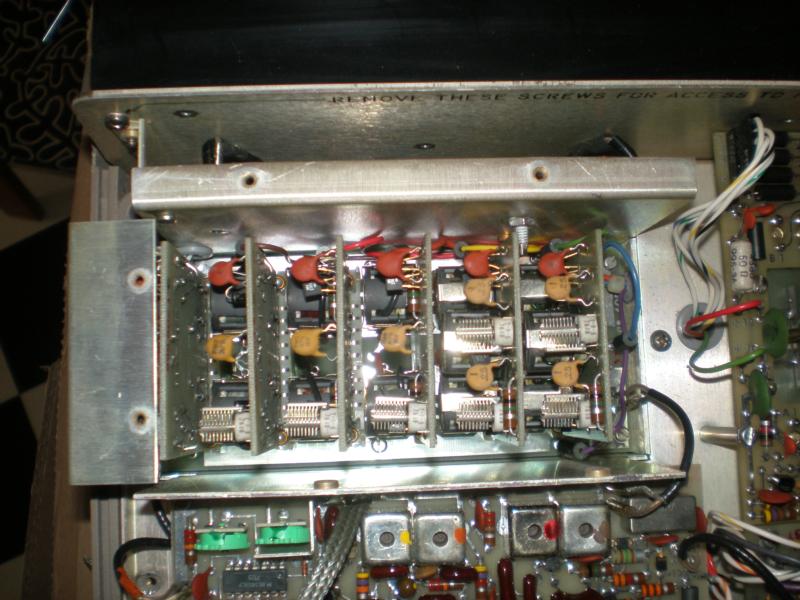 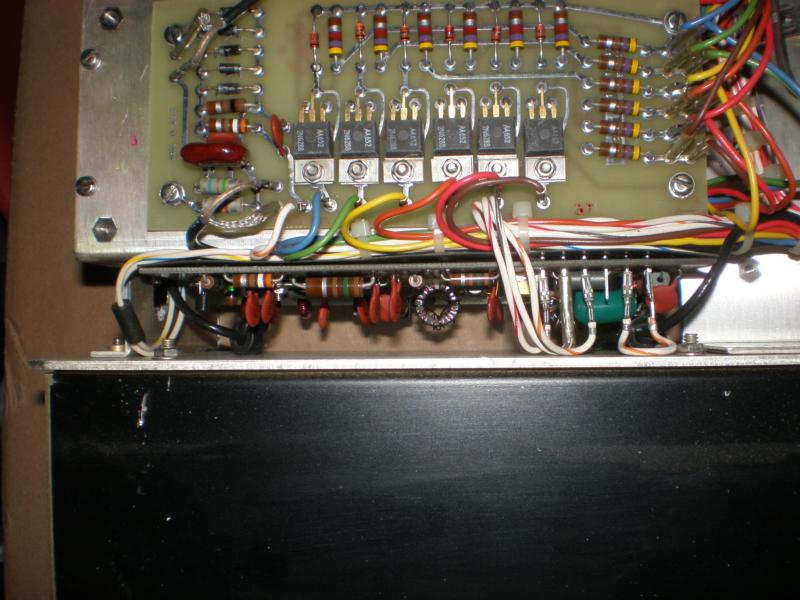 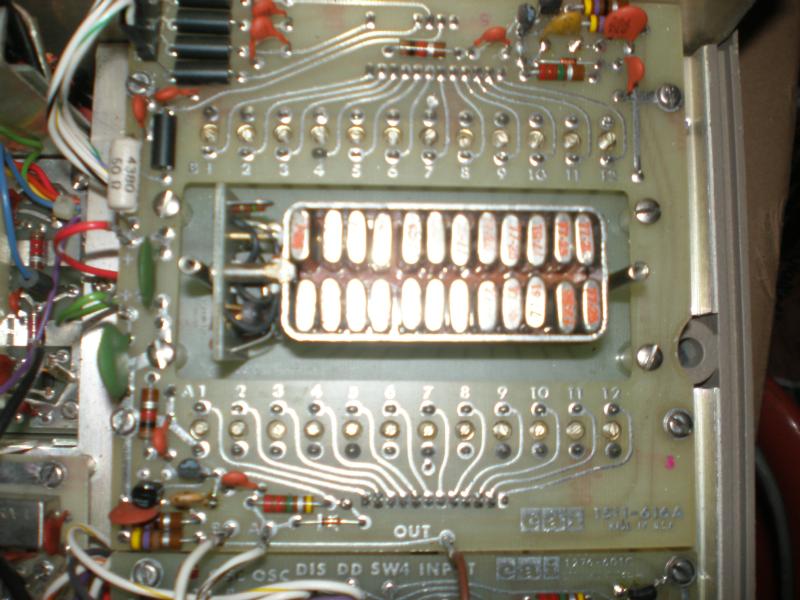 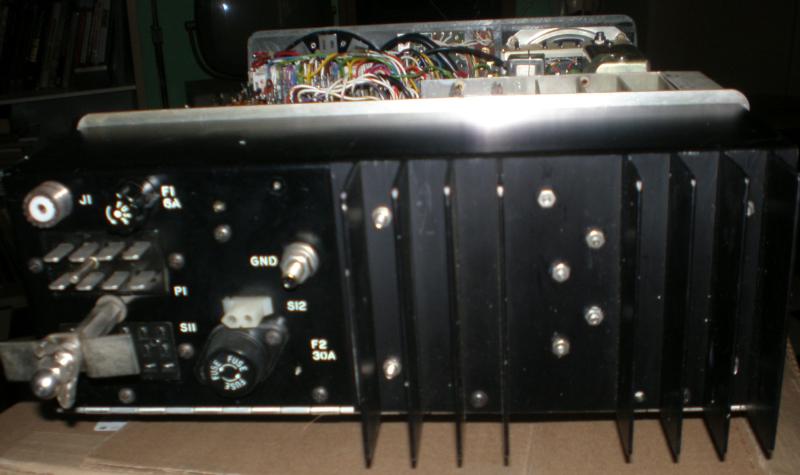 Close up of a channel board 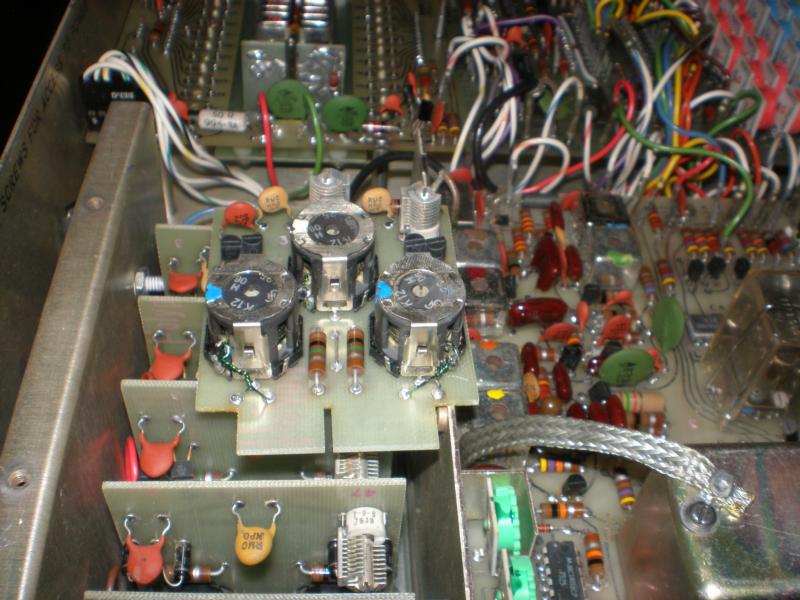 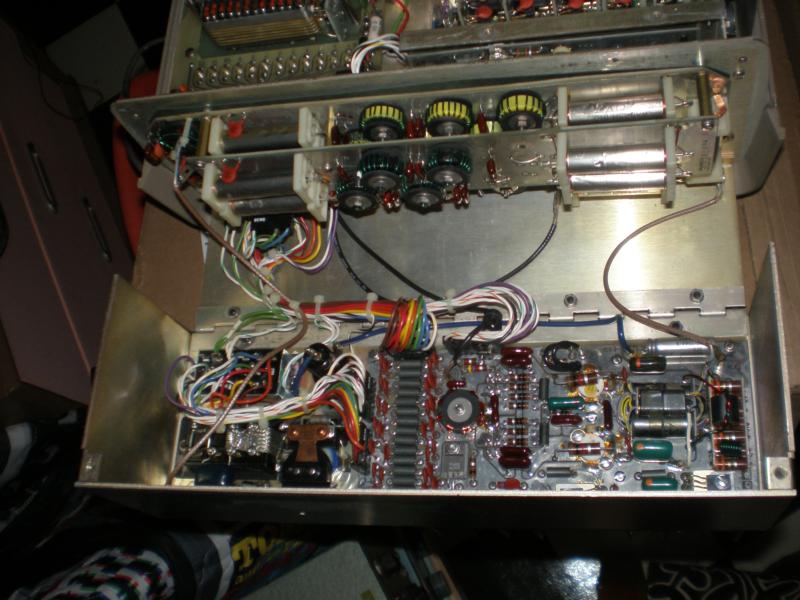 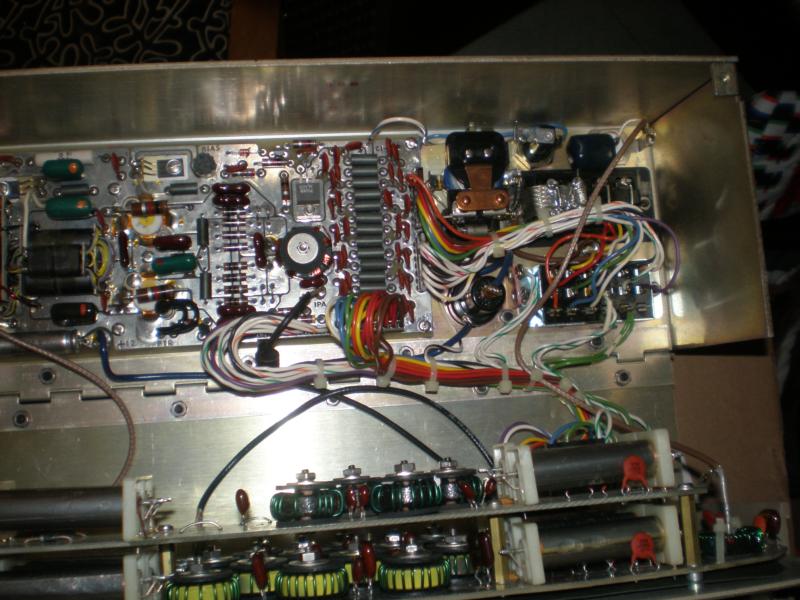 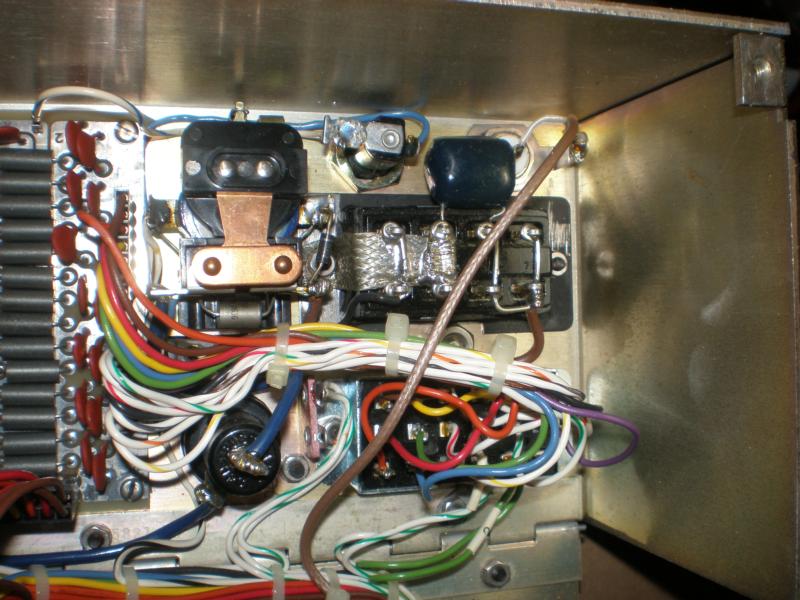 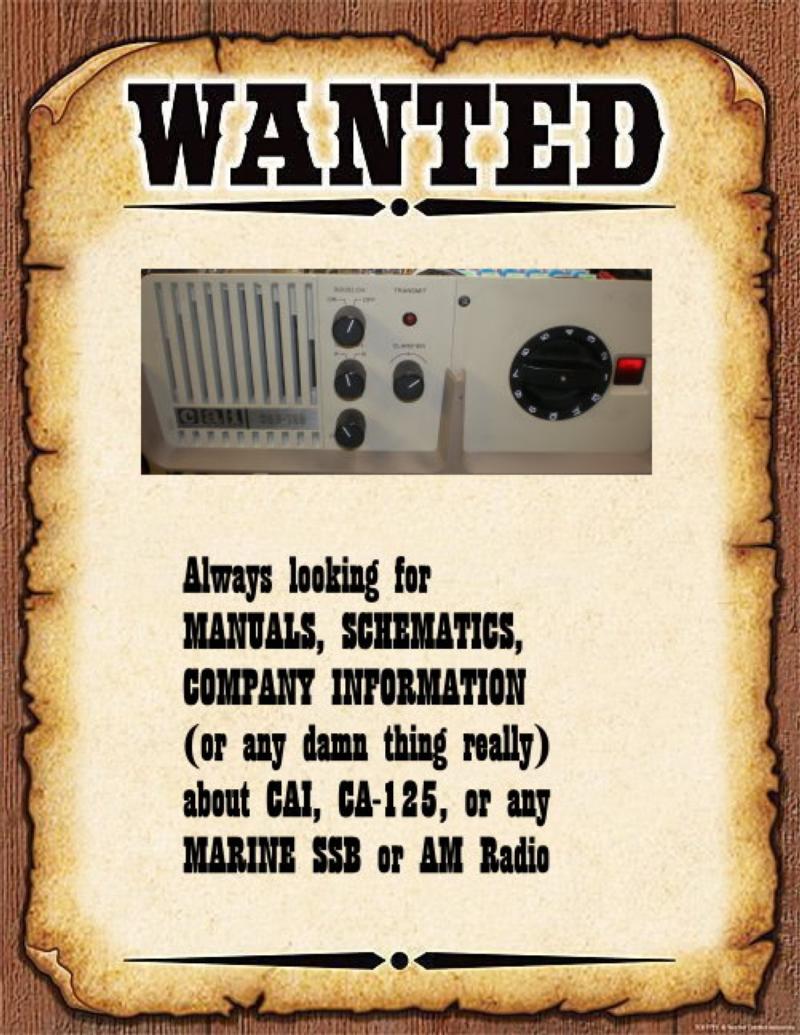 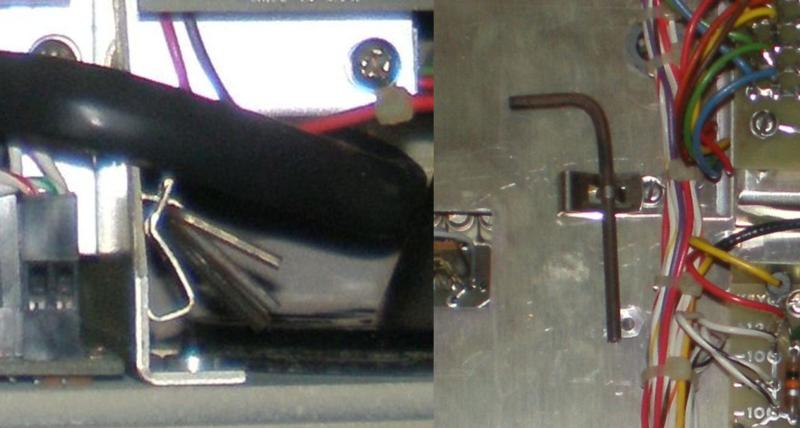 Trimpots for tuning and gain 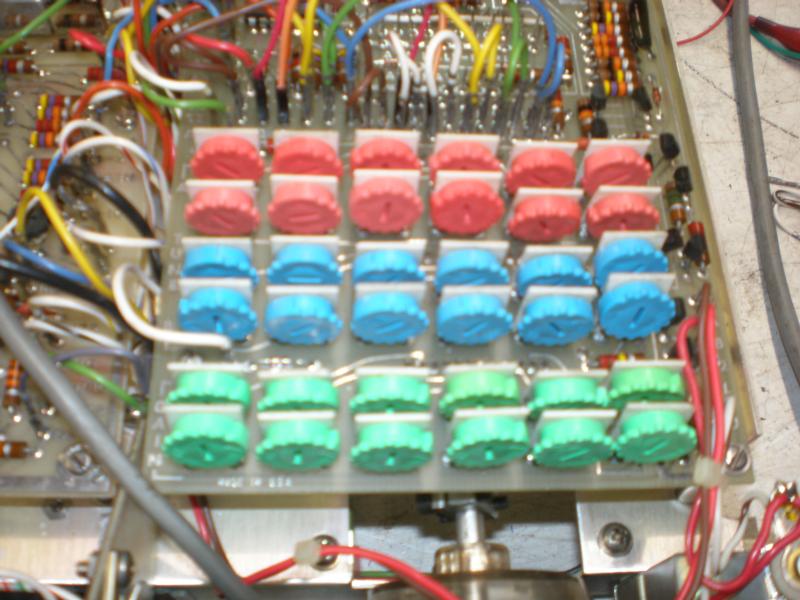 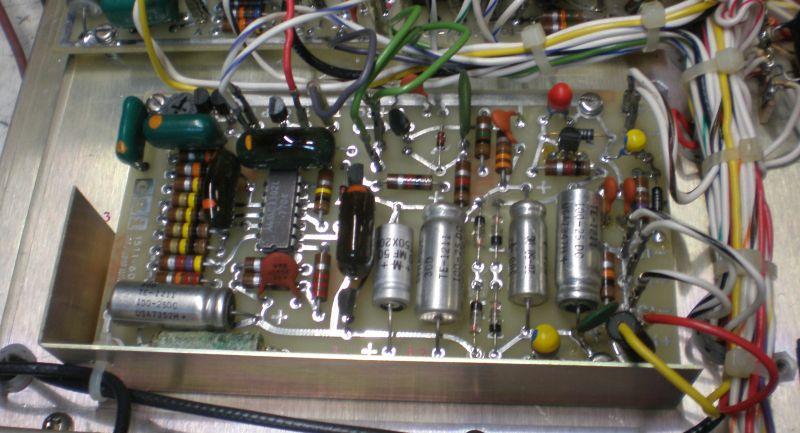 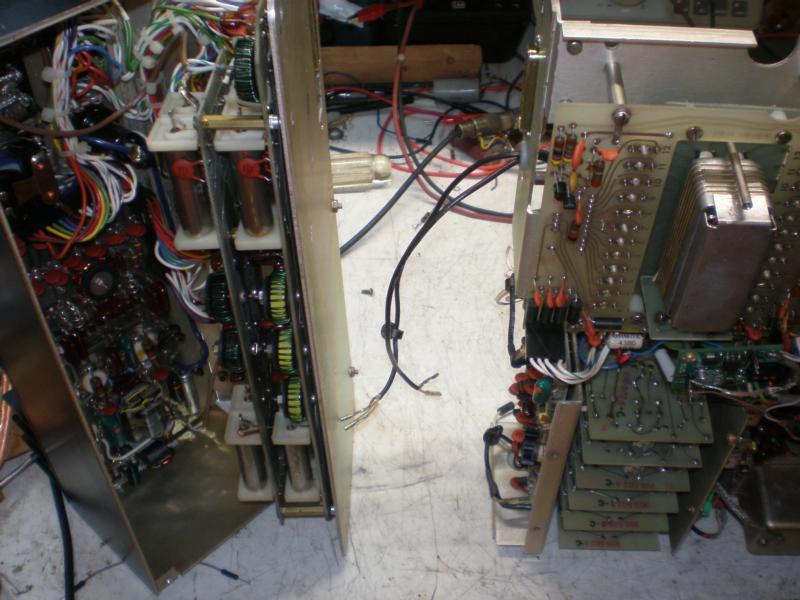 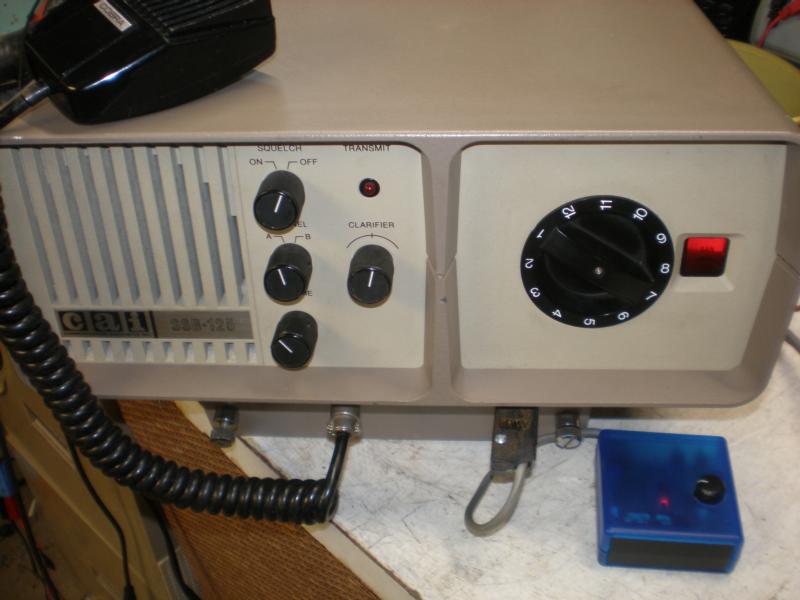